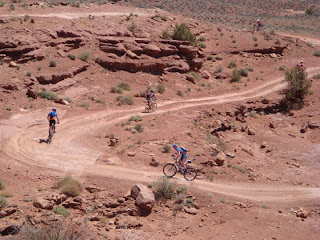 Chris following me up a climb 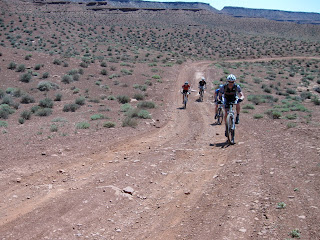 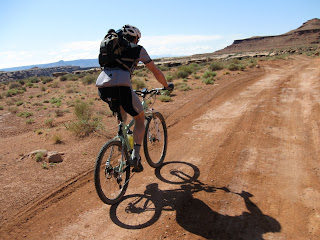 Ben on on his new Siren Song 55 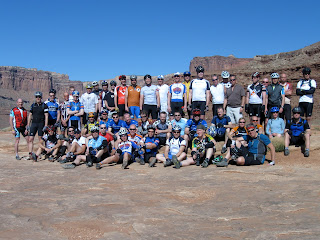 Most of the White Rim Group 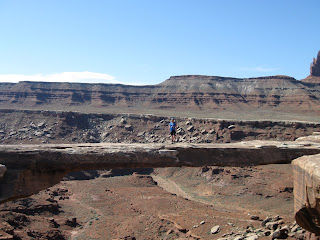 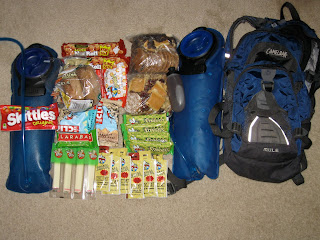 Way to much food for a 100 mile ride, but I was a hit with extra cookies! 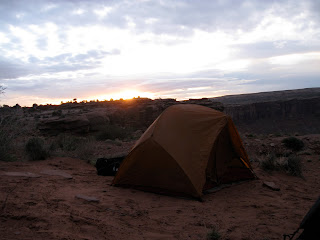 My campsite for the weekend!
Ben and I had been planning a weekend trip to Moab for a couple months.  Both of us have had a couple  busy months at work and a break was well deserved.  Mid week Chris decided to join us.  Thursday night we left town as soon as Ben and I could get out of work.  Vail was the destination for Thursday as Ben has a friend a little west of town that let us stay the night, which worked out well as we were able to get a jump start on the weekend and more importantly beat the snow.  Friday morning we drove to Moab, UT to ride Sovereign and some trails nearby.  Fridays ride info here.  Sovereign is a lot of fun.  We ended up riding for about 3.5 hours, which made me a little nervous since we had a 100 mile ride on tap for Saturday.  After our ride, we went off to Paradox Pizza owned by Fred Wilkinson.  The evening was capped off by setting up our tents, going for a little hike/climb, and kicking it by the campfire with the other riders.
Saturday was Kenny Jones's annual RAWROD, (Ride Around White Rim in A Day), so a lot of the Utah enduro riders were there.  We even got to ride with Fatcyclist!  We got a late start, but kept a consistent pace for most of the day.  The temperature was perfect for riding, 70s and sun, which beat rain and snow in Denver.  There were probably somewhere around 50 people that did the full 100 miles, which was an amazing turnout.  This was the fourth time I did this ride, and it went about the same.  I felt really good for a lot of the ride.  There were two points that I kind of felt burnt out.  50 miles or so we had a gradual climb.  It never kicked up, but the time in the saddle was taking its toll.  Towards the end of the ride I was quite tired as well.  The rest of the ride I felt really good.  Even after Fridays ride I still climbed pretty well on the single speed and even made several short steep climbs.  Ben, Chris, and I made burgers on my little grill and had a few beers and enjoyed the campfire once again.  RAWROD info here.
Sunday we decided to ride the Kokopelli trails in Fruita.  I felt really good on the mountain bike and with three days in a row I was riding technical stuff pretty well.  The trails we rode had a lot of rocky ledgy stuff and rolled really well for the most part.  29ers feel at home on this trail.  This weekend I've concluded that I am sick of my Fuel, am done with 26 inch wheels, and disc brakes are much better than rim brakes (really???).  I felt so much better on my Gary Fisher Rig even though it is a single speed then I typically do on my Fuel.  I can't wait to get my Leviathan built up.  148 miles on the mountain bike and 14 1/4 hours of moving time.  It was a lot fun as I really like riding in the desert and camping.
Posted by brett ebben at 8:32 PM No comments:

There is nothing like being up against the clock or following others around for some good speed work.  This weekend I did both.  Saturday was the second round of the RATM Death Match.  I was the last person to start the climb up Lookout Mountain on Saturday.  Lookout gains about 1,266 ft. in about 4.5 miles.  My legs felt like boards the first 9 minutes or so of the climb as I had about an hour off after got there (21.5 miles to the start 1,050 ft already climbed).  I reached the end of the climb with a time of 23:50, knocking 1 minute off of last month's time.  Eric, Jeremy and I, who all bike to Golden together did another lap up the climb after we parted ways with the rest of the team.  The second time down seemed quite a bit cooler.  We rode straight to Starbucks on main street of Golden where we hung out for an hour or so. 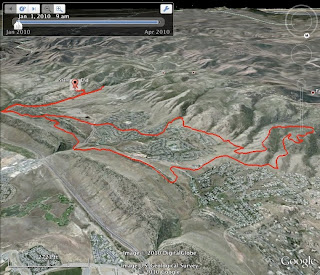 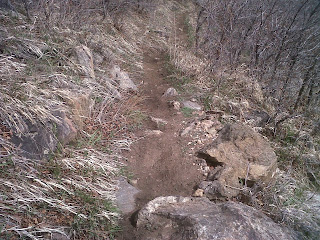 An example of the trails.  Fun!!
Sunday I met Ben at the Deer Creek trail head.  DC is still snowed in, but Ben knows of a bunch of other trails open in the area.   We rode a bunch of the Ken Caryl trails, which you need a pass that is only available to residents of the area.  One of the trails we rode had a constant grade of 15%-20%.  They were in pretty good shape and we encountered very little snow.  There were even some places with some nice technical sections.  Following Ben around made for a good workout, and then when we were about done mountain biking, we followed some road riders up the canyon until I had had enough.  Between both days, I got in about 80 miles and 7,000 ft of elevation gain.  Sunday's ride info.
Posted by brett ebben at 3:24 PM 1 comment: