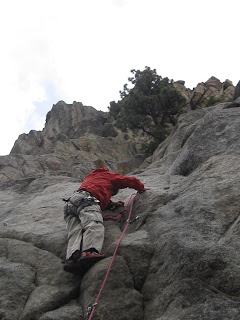 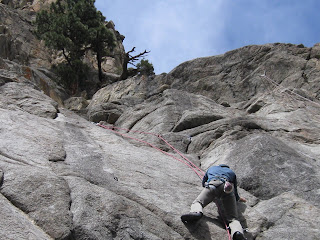 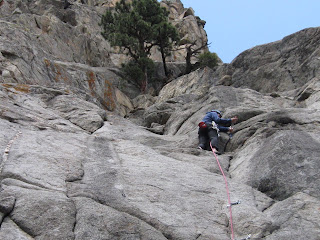 Chris placing pieces on the 5.7
Saturday morning Chris and I set off for our monthly 100 miles on the bike.  This particular Saturday was a bit overcast and dreary.  The northwest part of our ride, from Westminster, Golden, and a bit further south on the C470 we got misted on.  The rest of our ride was rain free, which was sweet as there was a pretty good chance of rain by the local weather forecasters.  We kept a pretty good pace for about 90 miles and then turned it down a bit for the final stretch.  We did not stop for anything except stop lights and stop signs.  Four months with a 100 mile bike ride down, eight months to go!
Sunday Chris called and said he and Marni were going to climb a bit in Boulder Canyon.  I met them about an hour later and we hiked up to some places where we could top rope.  We got a little higher than we thought and ended on top of where we intended on climbing.  Chris set up an anchor and we had to rappel down about 100 ft.  We picked a route that was a 5.7 to warm up on and Chris led the first route.  I went up next, and felt ok.  Its been a while since I climbed outside, and it is a bit more nerve wracking.  Marni went up after that.  Chris asked if I wanted to try lead climbing.  I went up the 5.7 and was kind of fluent.  It was nice having tried to lead something that I'd just done so I was confident I could make it to the top.   Chris then tried a 5.11-5.10 and made it up pretty good.  I then climbed the next route.  It was tough getting started, but I kept moving.  There were a couple moves that were pretty difficult for me.  There was one point that I was more or less on the toes of my left foot.  My right foot wasn't on a solid position, and neither of my hands had a good hold.  After a bit of careful planning, I went for a move that was a bit out of my reach and was able to grab the rock.  Once I got past that, I was able to get to the top.  The next route we climbed was a 5.8.  Chris led, rapped down and pulled the quick draws and then the rope.  The second lead I attempted to place the draws and the ropes.  I had to climb about 20 feet up before I could place the first one and proceeded to place the next few without any hiccups.  The 5th and 6th were a bit more difficult, and I crossed the 5th, so I had to down climb to fix my mistake.  I was pretty nervous up top.  Then I got to the top and had to place the anchor, which was about 10 feet above my last draw.  Thankfully there was a nice ledge to stand on to place the anchor.  It was a fun day and I overcame a couple things that had previously made me pretty nervous.  I can't wait to build on what I learned today!
Posted by brett ebben at 6:59 PM No comments:

The previous two time trials have been good, but not ideal.  I typically work until 5, and I race at 6:17:40, so I had to scramble to get to the race, let alone get a good warmup in.  Today I left at 4 so I was able toA get a solid warm up in.  The coarse is about 10.5 miles with a couple decent hills and a couple deceptive hills, but it is mostly straight and flat.  Conditions were great for the race.  The temps were around 70 ish with a bit of sun, and light wind.  In tonights race I shattered my previous personal record of 27:00.5 with new PR of 25:36 for an average speed of 24.61 mph.  Smokin!
Posted by brett ebben at 10:18 PM 1 comment:

Yesterday was the first race in the Cherry Creek Time Trial.  It was also my first road race ever.  I know the coarse very well, as it is one of the places that I ride my road bike quite often.  I was late getting to the race, had to get my number, got about 4 minutes of warm up-which is no where near enough, have never used aero bars in my life, and got to the start line 14 seconds before go time.  I left the start shoot and tried to warm up in the race.  I felt good considering I was not ready.  The race consisted of 10.5 miles of road.  I had a goal of about 28 minutes.  Because of my late arrival to the start line, I had no idea what kind of pace I was putting down because I did not have my computer properly set.  All I knew was that my heart rate was pegged at 180, which is pretty high for me to hold so early in the season.  I ended up with a time of 27:02 and an average speed of 23.3 mph.  It probably would have been better, but I was all over the road because of my aero bars.  I am really happy with this pace considering everything.  Six more weeks of racing the TT, I can't wait until the next one.
Posted by brett ebben at 7:33 PM No comments: 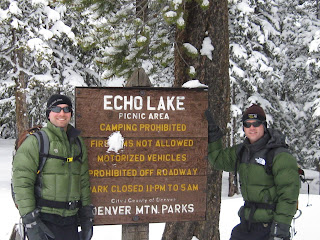 At the trail with new jackets! 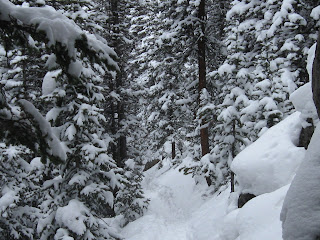 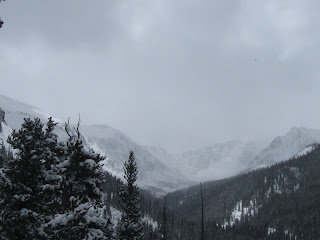 Today Chris, Jeremy and I decided to go to Frisco to look at skis at a shop that had rentals on sale and then head to the south side of the Ben Tyler trail.  This did not work at all.  The shop at Frisco opened at 10, which we thought it opened at 8.  Turns out we went to the wrong shop.  By the time we figured this out and went to the right shop, all of the skis we wanted were already gone.  They did have 50% off on winter gear though.  Chris and I each got down jackets that are the same color (only ones they had, not completely intentional).  At least mine is a Mountain Hardware Phantom (crazy warm), where as Chris's is The North Face.  Plus it was getting later in the day and we did not feel like driving all the way to the Ben Tyler trail.  Since it decided to be winter again in Colorado, we went thought it would be best to go to the Echo Lake trail head near Mt. Evans, which is closer to Denver so we would not have to fight ski traffic.  The snow was actually really nice, and so was the trail.  We snow shoed for a couple hours and then headed back to Denver.
Posted by brett ebben at 7:22 PM No comments: