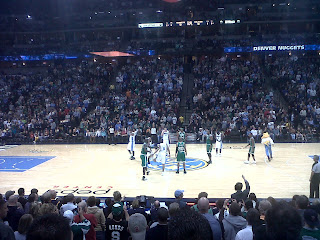 Thursday night Pat (friend from back home who lives in Fort Collins) got tickets to the Nuggets Celtics game from work.  Turns out they were the 9th row centercourt.  Easily the best seats I've ever sat in to watch a basketball game.  I've always been a fan of Ray Ray and KG, but I was pulling for the home team.  The Nuggets won 89-75 in an game that was really close until Denver went on a 16-0 run at the end.  They are 2-0 since the Melo trade, which if the season started after that, and ended now, that would be really good and they would have the best record in the NBA.
Posted by brett ebben at 11:16 AM 1 comment:

One of those days

Saturday Eric and I met up for a big road ride with a few long climbs planned.  Blue skies and warm temperatures had us excited for the challenges that lied ahead.  Not long into our ride Eric flatted, and then the 2nd tube went flat.  He decided to head to REI, which was maybe 4 miles away to replace the tire, tubes, and CO2.  Walking and carefully riding on the rim was going to put us way behind schedule for our adventure.  2 hours in, and we had maybe 16 miles.  It was shaping up to be one of those days where nothing goes right.  We even discussed getting lights to finish our 100 mile ride.

We decided to change our plan from riding up High Grade (well named)  to Evergreen and down to Golden to just going up High Grade, a lap around Chatfield Reservoir, back up to REI, and home.   The climb up High Grade was really good and we put in a pretty fair effort considering we were not even at the halfway point of our ride.  The wind picked up out of the south as we were towards the southern part of our ride and it looked as if precipitation was moving in.  We picked the pace a bit and had a tailwind for the majority of our return home.  A quick stop at Walgreens for some Gatorade and Snickers fueled me through the final hour and helped us beat the rain.  I ended up with 106 miles and about 5,000 ft of climbing and felt great the whole day and even saw a couple friends along the way.  I guess it turned out to be one of those days.
Posted by brett ebben at 8:14 PM 1 comment:

Today we rode mountain bikes on roads up Deer Creek Canyon and around some back roads, including a new to me gravel road named grapevine.  I chased Ben, Eric, and Tim around all day.  Mark and Ben's friend Ken Boyer rode with us for a while as well.  Todays temperatures and ride gave us a taste of spring!

Info here.
Posted by brett ebben at 12:40 PM No comments:

After three consecutive days of bitterly cold weather and very little cardio, I decided I better do something about this.  I hate riding bikes indoors.   I hate riding bikes indoors (duplicated on purpose for emphasis).  If I ride my trainer in my little apartment, it will smell like a gym.  This is no good.  The workout room in my apartment complex where I could ride my trainer is locked and under construction.  24hr Fitness has a 6:30 cycling class.  I decided to go.....

I got to the gym and signed up for the last class.  After that, I went to check out the cycling class room.  Much to my surprise, the gym has very nice bikes.  Things were looking optimistic here.  I found a bike and started warming up.  A few minutes later an employee from gym said the trainer/teacher person was not going to show up.  Fail.  I had to come up with a plan, otherwise I was going to be bored out of my mind.  I decided I would do a few intervals after a nice warmup and then try to outlast everyone in the gym.

Right out of the gate, half the group pulled away from the pack, I went with the breakaway (or half the group got up and left).  I sat in the middle of the pack on this mostly flat course and decided the best way to finish first was to get a good warm up in and save my efforts for later.  I put in a few attacks that were exactly 3 minutes each and this shelled a bunch of the group (we passed the 30 minute mark, and they were probably bored, so they left).  By now I was getting a feel for the rest of us in the group.  There looked to be a few strong riders left (people in actual cycling clothes).  At about 45 minutes, there were six of us left. I rode behind a tall rider in Capo gear (going forward, he will be referred to as Capo).   I figured sitting behind Capo would provide a nice draft.  He looked strong, but he did not look like a climber.  I was hoping that there would be some elevation gain eventually and then I would make my move.  About an hour into the "race" two more people were dropped (left).  Capo seemed to be showing signs of weakness at this point.  He started sitting up and stretching, so I made my move (or I sat there and kept pedaling).  At the 1:10 mark it was me and another rider.  He looked strong.  Some friends were talking to him and distracted him.  Finally, he got up and left.  1:18 into the ride (race!) I sprinted to the finish.  Victory, I was the last person standing (sitting?).

I actually survived riding indoors.  Thankfully the final sprint the ended the race.  I could not take any more of this.  I hope the weather gets better here so I can actually ride outdoors.  1:18 isn't much, but it is most likely better than couch time.  Can't wait to ride outdoors tomorrow, pretty much no matter what I am going to bike to work.
Posted by brett ebben at 7:47 PM No comments: