This past weekend was the Winter Park Hill climb and my first Expert race.  I've been feeling strong but did not know what to expect.  14 of the 18 riders took off like a rocket and 1/8 of a mile they gapped the field and kept going.  Unfortunately I was the 15th rider.  My effort was really high throughout the whole race as I managed to keep my heart rate about 180, but by the finish I had lost 3 minutes to the closest rider in my age category.  I am happy with my effort but not happy with the results. I have to come to the realization that this will be a very difficult year and to be successful one will have to be very fast.  The winning rider in my age category would have finished mid pack pro.  Ouch.  Results here.  Stats here.

Sunday Eric, Erik, Jon and I went to Colorado Springs to ride the Gold Belt Century.  It was kind of a strange ride as there was quite a bit of gravel and dirt roads.  Some riders choose cyclocross bikes, some with road bikes with 700x28c wheels.  I was the only one to choose a traditional mountain bike.  The Trek Fuel with 1.8 inch mountain bike tires was my setup.  The first 31 miles I averaged 18.9 miles per hour! The ride offered a lot of different types of scenery and a lot of climbing.  We had a van follow us which allowed us to eat a lot throughout the day!  The pizza stop in Victor was pretty good.  Photos tell the real story.  Garmin stats here. 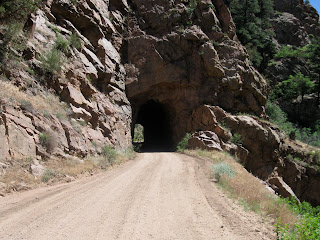 One of several tunnels we biked through 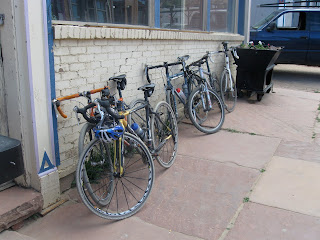 Variety of bikes parked outside the pizza place 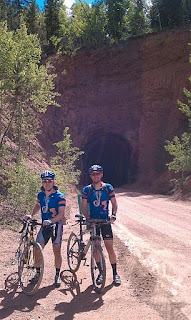 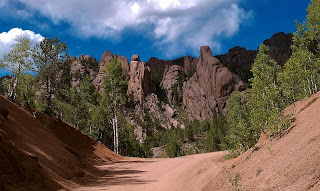 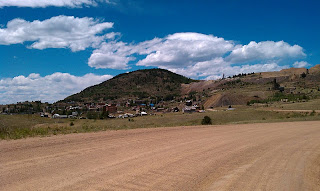 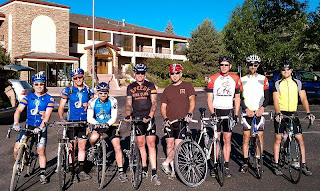 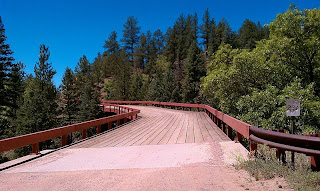 Posted by brett ebben at 7:58 PM No comments: 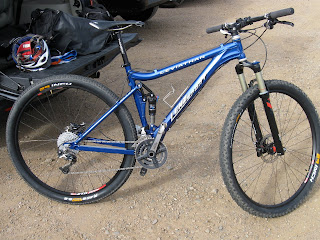 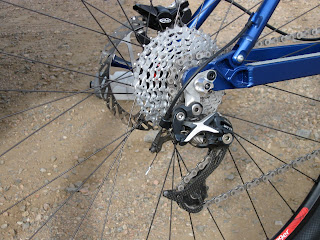 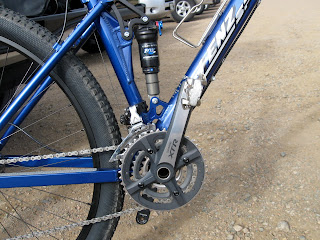 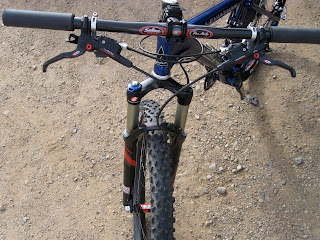 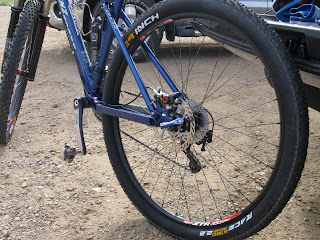 Posted by brett ebben at 5:46 PM No comments: 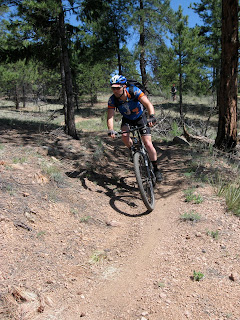 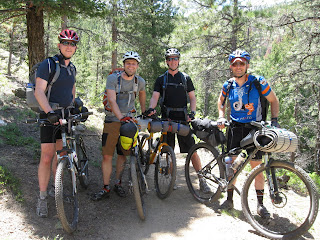 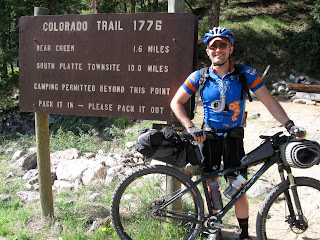 At the start of the Colorado Trail 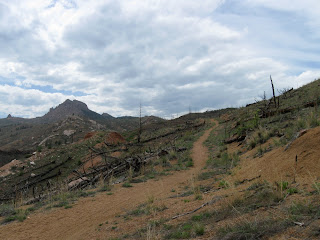 Not far from our campsite 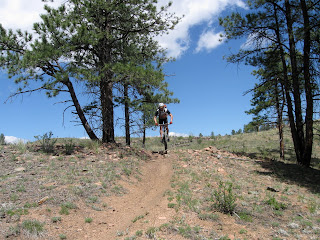 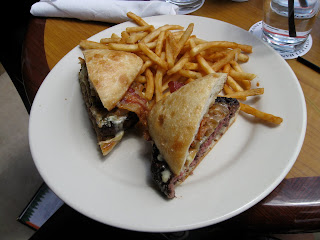 Zoka burger, I hope you are not the culprit! 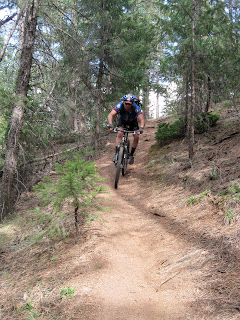 A few years ago Nick and Chad started an annual Memorial Day weekend camping trip.  Last year I joined them for the Goose Creek loop in the Lost Creek Wilderness area near Buffalo Creek.  For 2010, we wanted to do something different.  I recommended spending three days bikepacking on the Colorado Trail, which is something I've been itching to do for a while.  Bikepacking combines mountain biking and camping, which are two of my favorite things to do.

Saturday May 29th Nick, Chad, Dave, and I met at the Waterton Canyon in southwest Denver.  Waterton Canyon is the beggining of the Colorado Trail.  We had no idea how far we could get or where we could or would camp.  Neither Nick or Dave are really cyclists so I had no idea what to expect.  This trip was the first time bikepacking for all four of us.  I've never been past Lenny's rest (8.9 miles from the trailhead), so I did not know what the terrain was like.  Sounds like the making of an adventure, right.

The weather for the weekend was near perfect.  The trails were in good shape as well.  Though there is a pretty fair amount of climbing in the first 20 miles.  The terrain is rocky in places, and there is a bit of hike a bike, especially for people loaded down with 3 days worth of supplies on the bikes.  I rode my Gary Fisher Rig, which is my single speed, and used a 32x20 gear.  The first day proved to be great strength training.  We crossed the South Platte trail and had lunch (pizza Dave brought, thanks Dave!) after about 16.5 miles and were able to filter some water to re supply.  The beginnig of Segment two of the CT (Colorado Trail) is a pretty good climb and enters into the burnt out area as a result of the 2003 Hayman fire.  As a group we decided it was within our best interset to find an area to camp about 2.5 miles up the climb.  We found a flat area on top of a ridge which looked good.  It was next to the trail but a bit higher up.  It provided a pretty good view of most of the surrounding area.  The rest of the evening consisted of setting up camp and relaxing.  There was a rock we climbed up onto with a nice overlook, and here we spent most of our evening.  Both Nick and Dave agreed that day was the hardest thing that they had ever done.  Day one numbers.

One of the things I was unsure about was how do you do an out and back in three days.  Well, the second day we dropped our camping gear and carried just what we needed for a day trip.  The plan was to ride about 7.5 miles on the CT to highway 126 and head into Pine to catch get some burgers at Zoka's.  The start of the ride still included a fair amount of climbing, but was a lot of fun overall.  Rolling pine forrested singletrack led us into more of the burnt out area.  126 took us to Pine on a little over 6 miles with a fun downhill which I hit 44.7 mph on my single speed.  Nick, Chad, and I hung out in Pine and had lunch then made the return trip back home.  The climb out of Pine was a good warmup with 700 ft in 3.2 miles.  The rest of the trip included mostly downhill back to camp.  Frisbee disc HORSE and a campfire was the nights entertainment.  Day 2 numbers.

Monday... oh boy.  A little after midnight I had a rumbling in my stomach.  I felt like I was going to be "sick," and was I "sick."  I am not going to go into it because I want you to continue reading, but I am pretty sure I got food poisoning.  Monday when I got out of my bivy to begin to pack I felt horrible.  I did not have any energy, I was moping around the campsite, packing my bike pretty much took everything I had left.  I was not able to eat food, which is a great start to a 20 mile bike ride (sarcasm).  I was nauseous and had a headache.  I biked 2.5 miles to the South Platte trailhead and I had enough.  I could not go on.  Nick and Chad dropped everything but what they would need, and Dave and I hung out awaiting their return with cars.  I ran every scenario through my head which would lead me to get back to the cars on bike, but I thought it was impossible.  The main reason I decided I could not push on was because I could not eat.  I felt terrible that I could not finish my trip.  That really bothered me, but ultimately, I think it was the best decision.  Still a couple days later, I am not fully recovered.  Day 3 numbers.... not worth posting.

Things I learned on my trip.  I am terrible at estimating the amount of food I need for a trip.  Thankfully I always guess WAY to much, but my legs were not thanking me on the way out.  My bivy was really nice and much smaller than my tent.  I will always use that when I camp and weight is an issue.  Chris's Epic Design Super Twinkie was great, and if I do this more, I will most likely get one.  I am really fit, and I always underestimate what a group can do because I base it on what I think I can do, and I pretty much tore the legs off of my friends even though I was on my ss.  Colorado is great, you can camp in so many places and the beauty of the state never gets old.  When you ride a bike with three days worth of stuff including camping gear, you get a LOT of attention.