This past weekend I went up to the Peter Estin 10th Mountain hut.  Our group had 14 or so people, most of whom met Friday morning for the trek up to 11,200 ft.  The weather for hike was warm and sunny, which is quite a contrast to the previous three hut trips I have done.  I think the other three were very cold, and at least one was quite snowy.  A base layer and pullover were all that were needed to keep me warm this time.  We even found the hut before lunch, which is a first.  This allowed for plenty of lounging around. 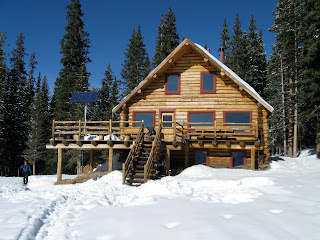 Home for the past weekend, no electricity or water, but pretty sweet 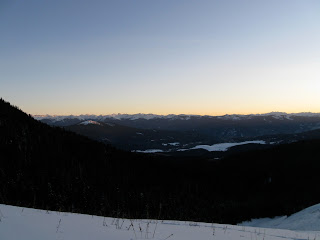 View from the outside of the hut
Saturday I got off to a slow start, but rallied after breakfast.  Most of the group took off for Charles Peak, which sits at 12,050 ft.  Five of us motivated sorts chose to go on.  Eric and I set the pace and our destination was the highest peak in the center of the picture below.  We encountered some extended ups and downs and had to break trail in fairly deep snow.  The pitches we experienced proved to be the most difficult though.  Even with my MSR snowshoes, which have amazing crampons, I was sliding down quite a bit and I had to use my hands to balance and crawl up.  Once we reached the hump in the middle of the picture, the terrain after it and before the long ridge were a little to dicey to carry on.  A quick snack and the others decided to return back.  Eric and I had no desire to head to the hut early.  As long as the sun was up and the temperature was tolerable, we sat on some rocks to enjoy the view. 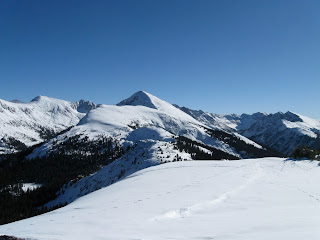 Taken from the top of Charles, which is higher than our turn around point 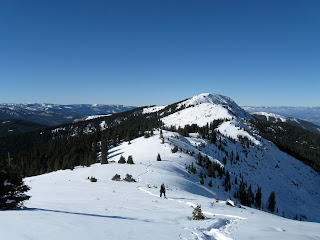 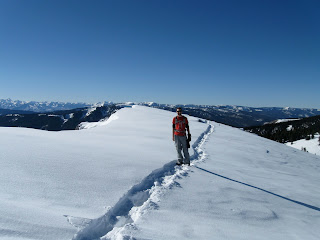 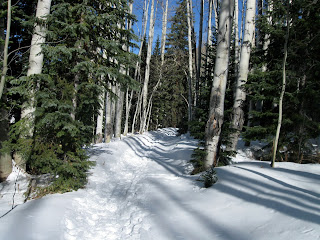 The trail back down 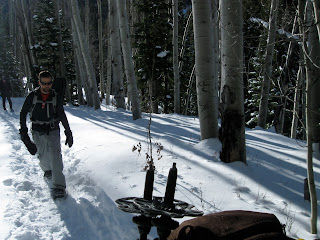 Posted by brett ebben at 7:41 PM No comments:

In January of 2009 a group of friends and I challenged ourselves to ride a century a month.  It became what we did.  Every month, we would get together, ride, stop for candy, cokes, and ice cream.  At first it was a challenge (not the eating part, the riding).  Can we get the ride in before it gets dark in the winter?  What about the winter, which Denver does get.  Early on, it was something I had to prep for quite a bit.  But it was fun.  I mean riding your bike all day with friends.  Its tough to beat. 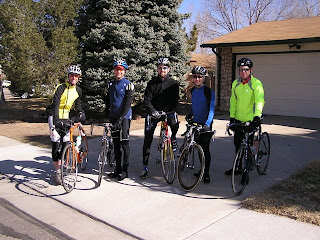 Chris, me, Brady, Erik, Jeremy
It also paved the way for bigger things.  Some of the rides were quite difficult.  I learned a lot while I was out there, wherever there might be.  What works well to keep me going.  How far can I push myself.

36 months later the streak continues.  36 consecutive months with at least 1 100 mile bike ride.  How it goes down changed a bit.  People moved on and don't ride as much.  Unfortunately I rode a handful of them by myself this year.  Will it continue, I don't know.  I will still ride my bike and get big rides in, but the 100s, well its not quite the same doing this by myself. 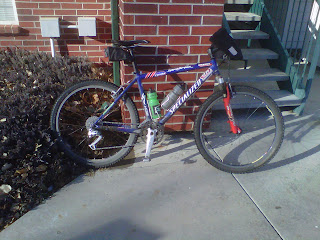 1999 Specialized M2Comp after its 1st 100 mile bike ride
﻿
Sundays ride, while not the most difficult (Mt. Evans from town?  WRIAD with lots of wind?  Wrist canyon with rain and maybe 50 degrees?) was up there.  I departed at 6:38 AM.  It was cold.  I turned back for more clothes.  The hose on my camelbak was frozen for at least the first two hours.  It was icy and snowy, which is why I chose the Specialized.  I certainly would have died had I tried to ride my road bike.  The ride itself was pretty uneventful.  Lots of bike paths, a few roads, some state parks, and a pretty fair headwind out of the south.  About the most exciting thing that happened was passing a pack of roadies as they were walking on ice and snow a few minutes after they blew by me.  I rode the snow.  They hiked it, ha.  Oh, and I had to get done by 1:50 or so so I could see the kickoff of the Packer game.  Almost 7 hours of pedal time, and I made it.  36 for 36.
Posted by brett ebben at 12:00 PM No comments:

Snow and frigid temperatures hit the Front Range this weekend and this called for an activity change.  I have a few snowshoe trips planned, so I decided to get my winter gear dialed in.  Saturday I went up to Rogers Lake with some friends that will be going with me to the Peter Estin 10th Mountain division hut shortly.  4 hours of snowshoeing, 2,000ft plus of elevation gained to reach a max elevation of 11,300ft, and temps hovering around 8 at the car made for a good test. 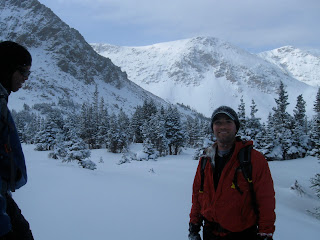 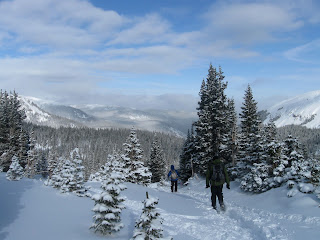 Sunday I rolled out the snowbike!  Few bikes give you more smiles per mile.  Tim actually rode with me to, and he was on his regular mountain bike.  I wasn't really sure how this "ride" would turn out as I've not ridden the Pugsley at Bear Creek State Park.  We rode around aimlessly for a while finding a lot of trails that had a little to much snow to roll consistently.  Then we found a fun loop consisting of 50% or more of wooded singletrack.  A few laps, and we had a small course that was getting good and packed down.  A little exploring and we were able to make a figure 8 that was quite fun.  My new winter shoes and Twin Six Metal jacket kept me quite warm.  Details here.  I will be heading back Monday for more laps, but this time it will be at night with lights.  Sick!  Will you be there? 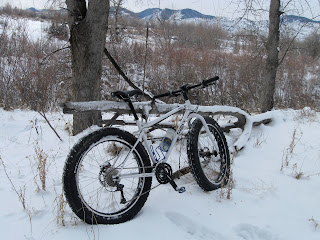 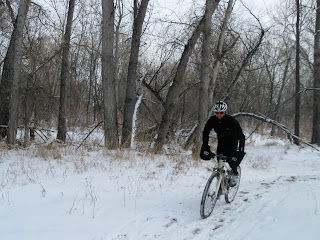 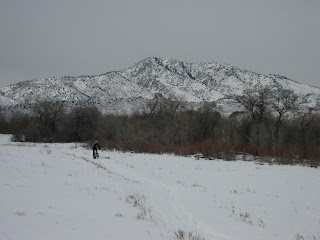 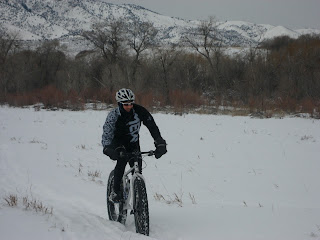 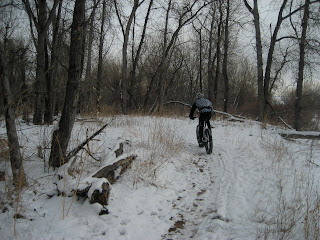 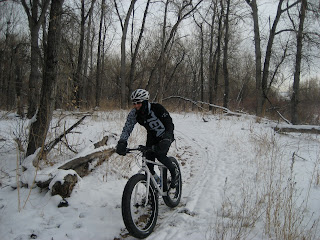 Posted by brett ebben at 8:28 PM No comments: