Today my check for the Chequamegon Fat Tire Festival cleared.  This is one of my favorite races. The annual trip to the north woods of Wisconsin to race against 1,700 other lucky entrants is unlike anything I have ever done.  This will be my 6th year in a row competing in the 40.  The race is fun, but the festival atmosphere tops it off.  Seeing many of my friends, cooking out, sitting by fires, and consuming post ride celebration beers is a great time.  I am excited as this year Scott, Chris, and Marni will be racing with me.
Posted by brett ebben at 8:02 PM No comments:

Moab for the Weekend 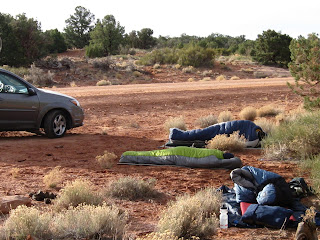 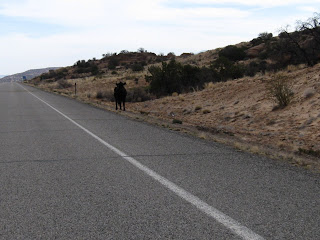 Random livestock on side of road while biking 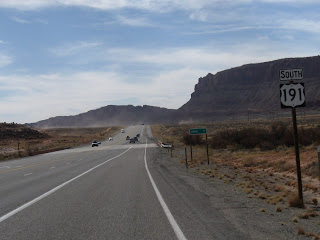 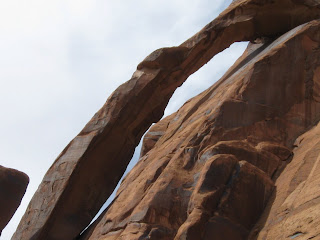 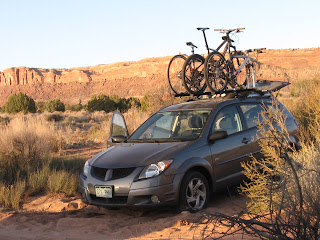 Vibe in Sand (not recommended)
Friday I ducked out of work early so that Jeremy, Chris D. and I could head off to Moab.  We got to our camp site at 11pm, and the sky was as clear as can be.  Hundreds of stars could be seen, and it was a great night to sleep under the stars off of Mineral Bottom road.  Saturday we slowly got going.  Jeremy and Chris wanted to go hiking.  I on the other hand feel that if I am in Moab and have any legs, riding bikes is the way to go. I Headed off by myself from the end of Mineral Bottom road and headed to Moab.  The initial descent and scenery was awesome.  Red rock and desert with the snow capped La Sals off in the distance.  I rode down 191 into Moab with the thought of riding down 128 which snakes around with the Green River.  Unfortunately there was a 1/2 marathon so the road was closed.  I decided to bike to Potash, which is in a canyon and mostly shielded from the wind.  It is 16 miles one way and was really nice.  I saw lots of people climbing and many people off to the Poison spider bike trail.  By the time I went back to Moab, 128 was open, so I rode out to Porcupine Rim and back.  I was pretty beat so I biked to Subway and chased that with a mint chocolate chip brownie ice cream sandwich.  66 miles on the road bike capped a 270 mile week.  Chris and Marni rolled into town a couple hours later and met up with us for more ice cream.  Dinner was at the Moab Brewery, which was nice despite the hour wait.
Saturday nights campsite was found off of Willow Springs rd.  We found a narrow sandy road.  It was a bit cloudy, and we were a bit nervous since we did not bring tents.  I woke up sometime around 5AM to a clear sky and stars.  After a couple more hours of sleep, the five of us headed over to the famed Slickrock mountain bike trail.  Jeremy and Chris D. really haven't done any mountain biking.  Both of them did pretty well and had great time.  It was quite windy, but there was plenty of sun.
Posted by brett ebben at 6:25 PM No comments:

Sunday was the third century of the year for me, as Chis P. Jeremy, Erik and I are trying for 100 miles on the bike in a day in each month of the year.  It reached the low 60s and was sunny throughout the day.  I was not sure how my legs would react based on Saturdays hike, but I turned out ok.  We rode out to Golden near the Coors brewery again and headed south to C470 out to the Cherry Creek trail and then back up to Westminster.  I was pretty tired by the halfway point.  I refueled at a gas station by eating two king size butterfingers.  It seemed to work for a while, but by mile 80 I was dragging again, so we stopped at the REI Starbucks, and this did the trick.  We all cracked 100 miles a block or so from Chris's house, then Jeremy initiated the final attack sprint!  Pizza, cookies, and recovery beers greeted us upon arrival!
Posted by brett ebben at 6:01 PM 1 comment: 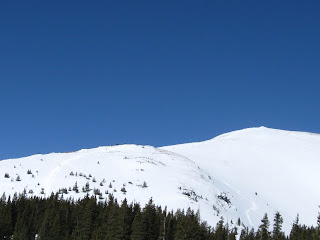 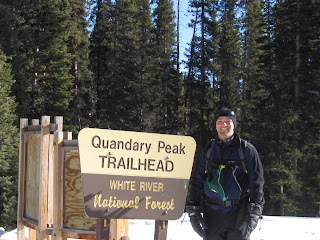 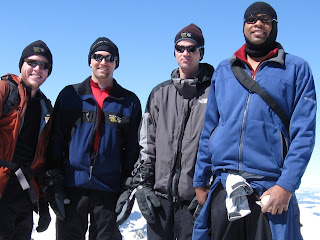 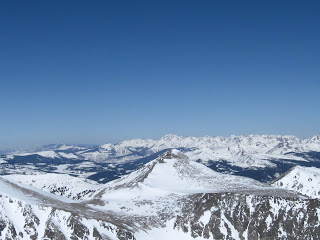 The view from 14,265 ft
Today we summitted Mt. Quandary.  I've really wanted to do a winter 14'er for a while.  Finally, today was the day.  When we started out, it was a little cold, but not bad.  There was not a cloud in the sky, and we did not see any snow tails off of the mountain, which is a good sign.  We got lucky with great weather and NO wind, which is rare at 14,000 feet.  Quandary is an easy hike, which is why we tried it in the winter.  The first half of the trail in through a pine forest with a fair amount of elevation gain.  Once you get to tree line, the steepness of the mountain goes up.  There are two really steep pitches, and I felt strong on both.  I was able to get to the top in under 3 hours with some fair stops.  I don't know how this compares to others, but 3.4 miles with 3,400 ft of elevation gain and snow, I think it is good.  Most of the people I passed on my way to the top said it took them more than 4 hours. Everyone in my group was to the top in 3.5 hours!  The view from the top was worth the effort.  I could see Greys, Torreys, Pikes Peak, and we think Long's from the top, which are all 14'ers, and some of them a pretty far away.
Posted by brett ebben at 8:34 PM No comments: 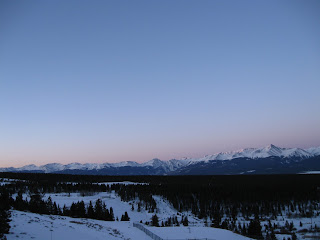 The view of Mt Elbert from Chris and Kathy's house, where we stayed the night before the race 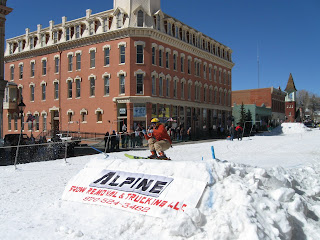 Some guy before a jump, notice the bigger jump in the background and the ring holders on the right of the skier, your left. 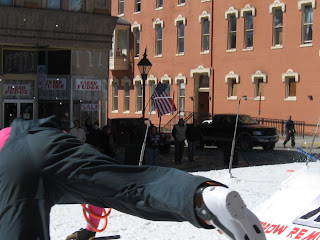 A skier eating it right in front of me!
Saturday afternoon Chris, Marni, Erik, Michelle and I went up to Leadville.  We stayed up the night before as the race was at 9AM on Sunday, DST.  Chris and Marni won a dinner that they had to ski into, and it was apparently pretty nice.  Erik, Michelle, and I went to Rosie's, a bar restaurant sort of place just off Harrison in Leadville.  I had a Chilli Jalepeno Bison burger.  There was so much chilli on it, I could barely find the burger!  It was awesome.
Sunday we woke up to very cold weather.  I think the temperature was 15.  32 racers showed up for the race.  Shawn and Bill met us just before the start.  As much as the cold weather sucked, it made for a really fast coarse.  It started with a gradual climb, and then there was a lot of up and down.  Because of solid snow, I was able to rail corners on the snow at 17-20 mph.  I paced another SS'er, who must have been a local, as he said hi to a few runners that were going the other way on the trail.  I got gapped a bit, but kept a steady pace.  With about a mile to go, I caught up to him and flew by him.
After the awards, we found a place to watch ski joring, which apparently is an annual tradition in Leadville.  Horses pull skiers at 50 mph over jumps, through gates that they sort of slalom through, and they have to spear rings with a stick and keep them on their arm.  If you can't imagine, it is completely crazy.  The coarse was taking 16 to 20 seconds to complete.  We saw a bunch of crashes, like the one in the photo above.  Some of the jumps were maybe 8 ft high.
Posted by brett ebben at 6:33 PM No comments:

Today consisted of being lazy, something I don't do much at all.  It was so nice.  Jeremy and I grilled beer brats, played super tecmo bowl (yup, Nintendo circa 1991!!!), and sat on the porch.  The weather was not as nice a predicted, but it was pretty sweet for March.
Posted by brett ebben at 6:35 PM No comments:

Chris, Erik, Jeremy and I are trying to ride a century every month, and Brady was the 5th rider Saturday.  We started in Westminster and rode to Golden to ride up Lookout Mountain, which is a 4 mile 1,400 ft climb.  I felt really good going up the climb even though I held back because it was only 20  miles in.  We rode beyond the peak and dropped down the back of Lookout Mountain at speeds of 35 mph or more in 35-40 degree weather.  It was a COLD descent.  We biked down the C-470 to Chatfield, over to the Cherry Creek trail and up past REI back to Westminster.  Most of the 109 miles was on bike paths and we ended up riding a few miles in the dark.  I can't wait for Daylight saving time.
Posted by brett ebben at 8:42 AM No comments: