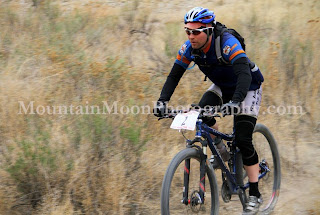 Tough race this past weekend.  I felt flat the whole race as I think I am still feeling the lingering effects of some big efforts early in the month (I have a 100 mile, 87 mile, and now a 67 mile mountain bike ride this month).  I finished 43/67 racers in my age category and 109/200 out of riders who finished.  Not sure how many DNF'd, but that isn't really to important.  One of my goals was to keep riding no matter how I felt and not take time off at aid stations or pitting as I lapped through.  I had 10 minutes of non moving time, which I am ok with.  I pitted for a couple minutes after lap two to eat a Honey Stinger Chew, which are so easy to stomach during a race, and a coke. 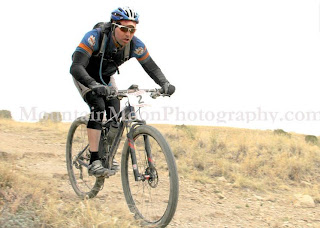 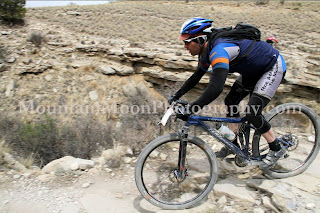 Why wouldn't I go out for another lap? 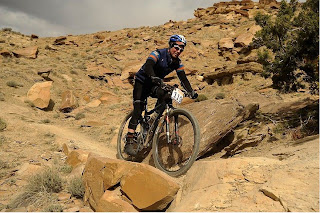 This past weekend Tim and I packed up the E full of gear to head to the Gallup New Mexico for our first race of the year and our first 12 hour mountain bike race, Dawn til Dusk.  The forecast looked horrible for race day, but it was still on.  We arrived at the race venue mid afternoon Friday to pre ride part of the course.  My take on the race was kind of flat with a 70% chance of snow the following day.  But the weather was great for the pre ride, and the course was a lot of fun.  It was a nice mixture of climbs, quick ups and downs, and some nice moderately technical sections.  Oh, and it was about 13 miles of singletrack, no fireroads or anything boring like that!  My excitement returned due to the fun factor of the course.  The rest of the night consisted of dinner, strategy talk, and getting all set at our hotel, which turned out to be maybe 5 minutes away from the race.  Our Best (worst) Western looked like a scene out of The Shining.  It probably hadn't been updated since 1973.

Saturdays wakeup call came at 4:45 for the pre race meal and dress.  There wasn't any precipitation at this time, but I still was unsure how to dress.  I was able to park the E right next to the race course near the finish line, which made pitting and changing easy.  I set up my cooler with all my nutrition right by the course, which proved to work out well. 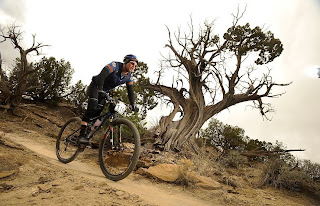 The first lap consisted of a 5 mile dirt road leadout and ducked into the last half of the course.  Shortly after the start, I knew I had over dressed.  My plan was to not pit for two laps, but I had to remove layers and grab my vest.  My first lap and a half were kind of all over the place.  I fumbled a bottle and was caught up in a mix of traffic.  About halfway through lap two, I started to find my rhythm.  The weather was good for the first couple laps, so I stopped and put sunscreen on.  Laps 4 and 5 the wind picked up and intermitent rain started.  There are a couple ridges on the course that offered good views, and off in the distance dark clouds loomed.  By the end of lap 5, my back was killing me.  In the first 6 hours or so, I took only 13 minutes off of the bike.  I lapped through, and was about to call it a day.  By this point, many riders had already quit and I saw a steady stream of cars leaving the parking lot with bikes and number plates on them.  Some riders were still lapping through though.  I was not sure what I wanted to do.  With cold temps, rain, snow, 40mph winds, and a sore back, I was certain I had had enough.  Tim lapped through, I talked to him for a moment, and asked him what his take was.  "Why wouldn't I go out for another lap?"  I pondered this for a few moments, grabbed a couple bottles, and rode off.

Lap 6 was great.  I felt way stronger after my break.  I was able to push gears I could not on the previous two laps.  Precipitation held off for a while and the crazy winds dried out the course nicely, making the sandy turns more tacky.  About halfway through lap 6, steady snow began to fall.  I finished the lap, did not pit, and was told 5PM was the cutoff now.  They were calling the race with two hours to go due to the worsening conditions.  I rolled out for lap 7 without hesitation.  By this time I was feeling very tired and my awareness was slipping.  About halfway through the lap I had a little crash.  I finished lap 7 at 5:03, so my last lap did not count. 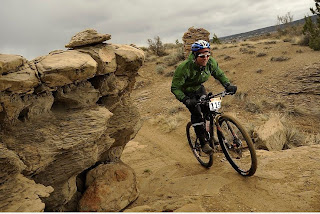 Warm gear for the approaching weather 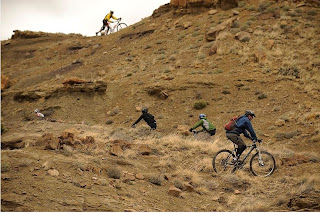 I was pretty disappointed in myself for a while for taking time off, but I think I needed it a bit.  The fact that my 7th lap did not count hurt a bit as well, though it did not affect my standings.  It was also good to get more miles and time on the bike, especially when I had already burnt a lot of matches.  As I reflect on it, I am proud of myself for getting back on the bike for two more laps.  I ended the day with 86.6 miles (7laps) in about 9 hrs which was good enough for 4th in my age category.  My Garmin GPS tallied 9,200 ft of elevation gain before I loaded my track to garminconnect, but it was a bit over 11,000 ft after I connected it (I count pre upload stats).  Garmin info here.

Dawn til Dusk is a great course and it was pretty well run.  I will consider this in the future, but with horrible weather two of of the last three years, I am not certain I will go back.  This was not an A race for me, but kind of a test and a big training day.  I think my effort was pretty decent.  Tim had a GREAT day, finishing 2nd in our age category and 4th overall for geared racers.  I hope to have pictures of the race and will post them if I find them.  They should be great and range from sunny weather to rain to snow.

This past weekend Eric, Jeremy and I headed out to Moab to ride the White Rim.  A rain storm destroyed Mineral Bottom switchbacks, which made the trip very difficult before this past week when the road was officially opened.  The weather looked ok for the weekend.  We arrived to our campsite for my first night of camping this year.  I did not even pitch my tent as there was not a cloud in the sky and the stars were out in full force.  5AM arrived very quickly after a long drive Friday night after work.  Fred, owner of Paradox Pizza, joined us for the lap.  It was a bit chilly at the start, but the gradual climb up the first road warmed us up quickly.  Once we got to the entrance, we were told we would have to bike down to the visitor center to get a permit.

The lady who helped me get my permit seemed very nice and helpful, but due to the switchback closure must not have been used to bikers.  Our conversation went about like this:

I always agree you should be prepared for as many things as possible, but I guess carrying an extra bike never crossed my mind.  Parts and tools yes, but a bike....  Oh well, something to consider for next time, maybe.

The day seemed to be shaping up quite nicely.  It was warm enough to drop down Schaffer's without being cold.  We rolled on and took pictures.  Eric was in awe of the ride and area as it was his first time doing WRIAD and it was also his first trip to Canyonlands.  We took pictures and made some of the usual stops to take in the sites.  The scenery on the whole ride is amazing, which is the main reason we continue to drive out to Moab for this ride.  For 80 of the 100 miles it looks like what one would picture the cowboys riding horses through in old wild west movies.

Somewhere around mile 40 the wind started to pick up.  We ended up having a pretty strong headwind for the next 30 or so miles.  After experiencing this wind, I would have to say it was more difficult than dealing with heat.  The combination of the loose sand, which was worse than usual, plus the wind, exhausted us and made us reach deeper into our supplies than I would have expected. Eric and Jeremy were quite low on water by mile 80, and I didn't have much more.  There was a campsite around mile 85 with a few people there.  We approached them and they were nice enough to fill a few water bottles.  Halfway up Hardscrabble, which is a difficult climb, we watched in awe as a carload of foreigners tried drive a Chevy Traverse up it.  Reason number 263 why I would never buy a rental car.  This car had no business attempting a lap around the trail.

Just before dark I was the first to bike into view of the Mineral bottom switchbacks, which is about a 1,000 ft climb in about 1.5 miles.  I started up the climb to attempt to conquer it on my single speed mountain bike.  I got about 1/2 way up and I was sapped.  The wind, sand, and lack of water took a lot out of me.  Oh well, hopefully there will be another attempt someday.  As far as the repairs, the trail is in the exact same place after repair.  Concrete was laid where the flood had washed out the trail.

With strong winds, clouds in the sky, and a possibilty of rain, we decided to drive down the dirt road we camped on to set up camp closer to the main road.  Once I found a good spot, it was time to battle the wind to set up my tent.  Post ride burgers were on tap, and then it was off to bed after a long day.  Crazy winds prevailed all night and I barely slept.  I poked my head out at 7:30 in the morning and rain looked iminent.  I woke Eric and Jeremy up and told them we should leave.  10 minutes later it started to rain on us.

As I drove home weather continued to make things difficult.  Blizzards in the mountains closed Vail pass and most of I70.  24 to Leadville was open, though I doubt it was much better.  The drive home took 10 hrs (5.5hrs to get there).  Pictures and ride info to come sometime this week, I hope.  It was 10hrs 6 minutes of moving time and 103 miles.  Its been a busy week and I have a crazy weekend ahead.  Its off to Gallup NM with Tim for this Friday morning!!
Posted by brett ebben at 11:53 AM No comments: