Where in Colorado is Brett?

Can you find where I am?
Posted by brett ebben at 9:03 PM No comments:

Last year the Breck100 was my first true solo endurance race.  It was the most difficult thing I had ever done, but I wanted more.  I signed up early this year and planned a difficult early season to prep myself for this race and to use it as a stepping stone and last big training day for this.  I did not have a defined goal (maybe something I need to work on), but I wanted to take more than an hour off of last years time and feel strong the whole race.

Thursday after work I packed up the E and started the drive to Keystone to spend the night.  I wanted to get up to 9,000 ft as early as possible to acclimate to the elevation.  After a half day of work Friday I went picked up groceries for dinner.  Tim was able to rent a sweet house for the weekend. 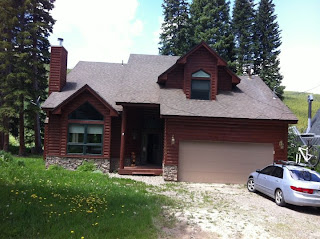 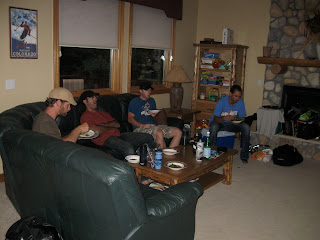 Dinner-Ben, Scott, Jesse  , Tim
The 3:45 AM wake up call was tough, but the excitement and coffee got me going. Quick breakfast and packing up the E and it was off to Carter park. 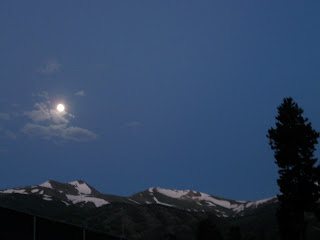 A snow covered Wheeler pass, the first climb
The race started at 6 with a moderate procession out of town to Peak 9 to start the 2,750 ft climb up to Wheeler Pass.  I started out at a moderate pace after getting a decent position at the line.  My goal again was to keep a moderate pace up the climb, which was pretty uneventful.  Brad passed me maybe a 1/3 of the way up and based on our times, we were probably no more than a few minutes apart during the race, but he was never to be seen again.  I reached the first snowfield and carried my bike for about 200 yards.  The next snowfield was just before the summit.  The group ended up dropping down to bypass the snow.  This ended up with a climb with pitches of about 50 to 60 degrees on scree while carrying a bike.  The backside of Wheeler pass is really fun when dry and I was looking forward to this descent.  The river flowing down trail made it sketchy though.  The Peaks trail was quite muddy as well.  I was not sure how I was pacing at this point.  I lapped through about 13 minutes faster through then last year.  A quick bite to eat and I was on to loop 2.


First snowfield
﻿
Loop 2 is arguably the hardest of the three loops.  The second climb is where I started to fall apart last year.  I felt good climbing the wooded switchback climb at the beginning.  French Gulch is the second climb and with loose rock, steep pitches, and stream crossings, its easy to redline.  By this time the fast Breck68 riders began passing me offering words of encouragement for the 100 mile racers.  I was able to ride almost all the way up to the hight point and creek crossing, where I passed a rider who crashed in the freezing cold stream (yes, he was ok).  The Colorado Trail is where I was starting to feel the effort.  Even the climb in this area is fun.  The descent down to Tiger Rd always puts a smile on my face.  Aside from a little rain, the rest of the loop was pretty uneventful.

Entering the Colorado Trail on Loop two, can't wait to see this again!
My stomach was kind of upset going into loop three.  Consuming nutrition through my waterbottles was difficult and thoughts of my previous years collapse were on my mind.  I grabbedd bottles with water instead so that I would continue to drink though.  By the time I started off for lap three, I knew I was a solid hour ahead of last years pace.  I had a few missteps on the singletrack up, but again was able to clear most of the climb.  Pre riding some of the trails helped quite abit, but my conditioning this year was way better, and it was noticable on the climbs.  I got to Boreas Pass (11,444ft) an 1hr18min faster than last year and treated myself with a coke, some enduralites, and orange slices.  The way down the Gold Dust trail to Como was quite wet again with rain and recent weather.  I rode by myself for the better part of 10 miles down.  I grabbed a couple slices of watermelon at the Como aid station and off for the 10 mile climb back to Boreas.  Once I got to the top I started doing some time estimations. I was all smiles at the summit.  I knew I would destroy my 2010 time.  All I had to do was hang on for the remaining 9 miles which was almost all downhill.  The continued descent and drive to beat 12hrs kept me going regardless of the exhaustion I was feeling.  I crossed the finish line at 12hrs 7 minutes beating my previous time by 1hr 47 minutes!!  I was 21st in my age category out of about 69 racers, 37 of which did not finish, which is an indicator of just how difficult this race truly is.

At the top of Boreas Pass
I exceeded my expectations for my finish.  Amy Welnak and her sister Denise were very helpful and kept me going as they were there to help with bottles and cleaning my chain between laps.  Carver bike shop was amazing.  They happened to have a set of XTR bottom bracket cups and stayed past close to fix my bike!  I think the difficult early season racing schedule is paying off as I learned and expirimented a lot with nutrition, how to keep going, and how far I can push myself.  8/1 is the next test, which I am both very nervous about and very excited, though I don't think that feeling ever goes away with a big challenge on the horizon.

Garmin stats here.  I had 22 minutes of non moving time in 12 plus hours!

This past weekend I raced the Firecracker 50 for the first time.  Its a classic Colorado mountain bike race that starts as part of the 4th of July parade.  I met up with Tim friday night to spend the weekend getting aclimated to the elevation and get some good rides in.  We rode two hours Saturday and got in a good chunk of the Colorado trail right from our camp site.  As of last weekend, there is still a fair amount of snow above 10,800ft.  Saturday and even Sunday's short ride I was still feeling the altitude. 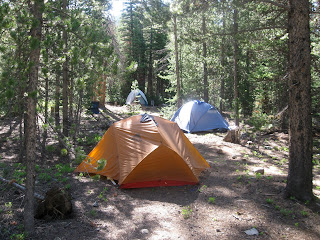 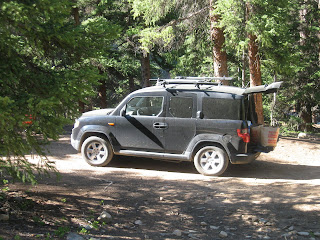 Dirty E in the woods
I ended up riding in the Maverick category since I forgot my USA cycling license (wanted to race CAT1).  My legs felt like boards for the first two miles, but then I started to open up.  Once I entered the singletrack I started to pick riders off and get a bit of recovery from the long climb.  I felt pretty good the first lap and was about on pace for a 5hr 30 minute pace.  The climb off the start of lap two drained me a fair amount and I could feel my pace slip.  I still had the energy to ride off of a ramp on the climb up and jumped a log that a group put off to the side of the road (as seen at about minute 11 of the video below) which I got a lot of cheers for even though I turned down the shot of Wild Turkey that was the award for this stunt (certainly would have lead to my demise).  Lap two was I was still able to keep a good tempo.  I even had the alertness to drop an Outkast reference after a volunteer said its down hill forever as I responded with a "for ever ever" (video for those of you who don't know).

I ended up with a time of 5:45 on a course that was longer than last year and included more singletrack.  I raced my Schwalbe Racing Ralph for the first time.  Its about 150 grams lighter than the tire I was using on the front but it still inspired confidence on the loose descents yet rolled a lot faster.  After this weekend I now have 14 days of camping for the year.  A pretty good video of the race I found here.  Note at 12:35 of the video there is a pretty crazy crash.  Word is the rider was fine.  GPS info from race here.  The race was a ton of fun and the volunteers were amazing-all the aid stations were well stocked.
Posted by brett ebben at 12:08 PM No comments: