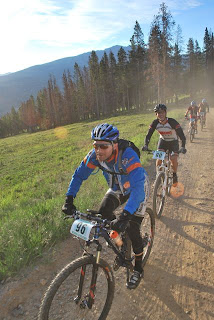 Posted by brett ebben at 7:06 AM No comments:

The weekend of July 31 to August 2 I will be riding in the Courage Classic, which is a 3 day bike ride . The Courage Classic is a fundraiser for Children's Hospital here in Colorado. Global Technology Resources Inc. (where I work) has always been very involved with the hospital and has actually had some families who have spent time at the facility with their children. For this and many other reasons, Children's Hospital is near and dear to us at GTRI. As such, we have started a team to raise money for the cause. Donations can be made using the link below.

Where the money goes

http://www.couragetours.com/siteapps/personalpage/ShowPage.aspx?c=tmL0KbN0LxH&b=5612731&sid=ihLUIXODKjISL6PNItF
Posted by brett ebben at 6:14 PM No comments:

Last Friday Amy, Ben (finished 6th in 30-39 B68!), and I departed for Breckenridge to find a campsite and to get to bed early.  The reason, a 6AM start for me for the Breck100.  I woke up at 4AM and started the day off with a box of Smores poptarts, a coffee, bannana, and some orange juice.

The race started a couple minutes after 6 and all the Breck 100 racers left Carter Park to take on the challenge of the National Ultra Endurance Series most difficult race.  The first climb went from about 9,600 ft to the top of Wheeler Pass which is 12,460 ft.  Before reaching the summit the race crossed a gulley with snow.  The first 1/2 mile of the decent down Wheeler Pass was very sketchy.  The trail was similar to a hiking trail with lots of scree, about 2ft wide at most, and rutted.  Several people crasshed, myself included. I had to straighten my handle bars after the crash.  The rest of the descent from tree line to Copper mountain was probably the best singletrack in the whole race.  The Lev handled great and I passed several people.  I caught up to Ryan and Andy from Twin Six who I met the night before.  It was great finally meeting them and riding with them throughout the race.  The rest of loop one took us up the Peaks trail, which was more fun then I would have guessed,  and down to Breckenridge.

Loop 2 started off with a switchback climb of about 1,200 ft.  I got caught up with the back half of the B68 and B32 riders which was kind of frustrating.  The second climb in Loop 2 was where I started feel tired.  4.5 hours into the race climbing the rocky fire road was taxing.   A long climb up the Colorado trail led to another amazing descent.  I finished up Loop 2 with what I figured to be plenty of time to get to the cutoff point at Boreas Pass....

During the pit stop before loop 3 the announcer said that time had passed for 100 mile racers to head out.  I knew this to be wrong, but the news still infuriated me.  I went to talk to the announcer, and he was corrected as I was talking to him. The cutoff for the race was 4:30 at the top of Boreas Pass.  Relieved, I tried to eat some food and frantically head out.  All I could stomach was a Coke, a bananna, and a handfull of rasins.  I was not sure if I could eat more based on the way I felt, and this came back to haunt me.  Mark Hansen  and I took off at the sametime to find the checkpoint.  We had no idea what was in front of us nor how far we had to go.  We pushed on as reasonably hard to get there as there was no way I was going to accept the defeat of being told I did not meet the cutoff point.  After about an hour of climbing, the trail spilled out onto a gravel road which lead to the top of Boreas pass.  I got to the checkpoint at about 4:20 with 10 minutes to spare!!  I was beginning to bonk hard though.  I ate 6 orange slices upon reaching the top.  Solid food did not seem appealling at all.  The next 1.5 to 2 hours were very difficult for me.  I felt like I could have taken a nap anytime.  Its to bad, as I the singletrack to Como seemed really fun.  I was far to tired to enjoy it and was wondering if I could carry on for another 20 miles.  At the Como aid station I ate two Honey Stinger Ginsting gels.  About 5 of us left the aid station and I was immediately dropped.  I knew it was about 10 miles to the top of Boreas Pass, but the only thing I knew for sure was its elevation.  11,444ft.  Finishing the race was all that was on my mind.  I watched the elevation and distance slowly tick away.   About half way up the climb I got my legs back.  I caught back up with Mark and we pushed hard to the top passing a few riders along the way.  I got up over the pass and blew by the aid station as I felt strong again.  After a couple miles of fire roads we entered the final sections of singletrack.  Mark and I bombed the singletrack with enthusiasm knowing we overcame the highs and lows and lows of endurance racing and were on our way to the finish.  The trails were really fun and pretty loose which made carving in and out of trees exciting for many reasons.  We put over 4 minutes on one of the riders we passed near the top of the descent by the time we got to the finish!

I rode in at 13:54.  I felt great crossing the line.  Finishing the Breck 100 was quite an accomplishment.  As of a week before the race, 72 riders were in my age group.  I finished 46th.  I am sure if I stayed on top of my nutrition I could have knocked probably 30 minutes out of my lap 3 time and possibly avoided a major bonk.  While I am glad I finished, the competitive peroson inside me is trying to determine how I could have been faster.  The race was really difficult and included a lot of great technical descents-definitely a mountain bikers course.  I now know of a nice free place to camp near Breckenridge and look forward to riding and camping there again.  This race will most likely be on my calender next year!  Much thanks to Amy for being there between laps.

Garmin track for the Breck 100.  I think my GPS did not record a couple miles of loop 1.

So it is now official.  I've registered for the Breck 100.  This will easily be my hardest day on the bike.  The goal: to finish.  I am both excited and nervous.  I've put a lot of hours on the bikes over the last year and a half, so I am hoping I am ready for this.  I will not know until 7/17 at about 6:30 PM though, which I should either be done with the race or very close to finished.  Game on.
Posted by brett ebben at 5:56 PM No comments: