Today I took my new Niner Air 9 RDO out for its first ride at Buffalo Creek.  The weather was perfect.  It was a little warm, which was actually ideal as I need to get used to riding in warmer weather.  I rode the normal loop since I know times and how my other bikes handle with a few additional trails.  I added 1/3 of Segment 2 and Green Mountain, which I've never ridden before. 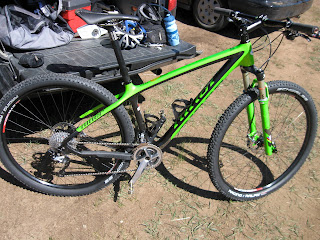 I figured that there would be some necessary trail side adjustments and a bit of a break in period.  I stopped a few times the in the first 1.5 hours to adjust the height of the seat.  The brakes took a bit of time to get used to as well.  My legs felt a bit sluggish too as I've been doing more speed work to get ready for the Whiskey 50.  My first impressions of the bike, wow, it climbs amazing.  Step on it, and it takes off like a rocket.  Even though I did not have a lot of speed today, I was still faster to the CT from 543 then I was on my previous ride, which I rode fairly hard and felt decent.  The XTR brakes are absolutely amazing.  I've heard people talk about 1 finger braking, but never really felt comfortable doing that with my old brakes.  The power and feel of the XTR brakes makes this possible.  I was also quite amazed that I was able to use the big chainring (38/26) the whole ride except one short stretch on Green Mountain, which is a pretty fair climb.  Ride data here. 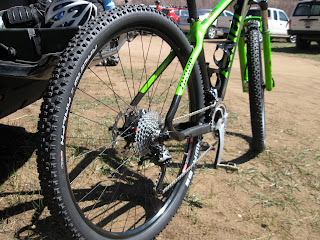 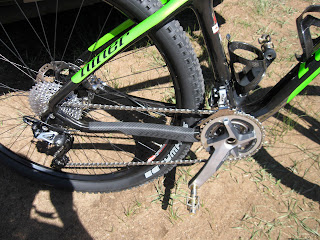 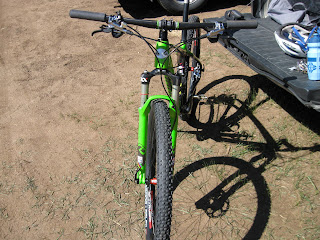 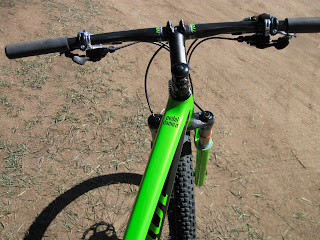 My bike is full XTR except for the cassette, which is XT.  The matching Sid XX World Cup felt sweet and looks even sweeter.  Crests, 240s, and Schwalbe Racing Ralphs rolled really nicely.  With Crankbrother egg beater 11s it weighs 21.7lbs.  I currently have a borrowed seatpost, which is a fair bit heavier than what I will have shortly.

I would like to thank Golden Bikeshop and Adam Boe, who was great to work with.  Adam was able to get me the green matching fork and the frame before Niner promised it.  He even borrowed me one of his seatposts for the time being until the one I want comes in.  Now thats customer service!  Getting the bike is especially key as a week from today I will be racing it for the first time.

Posted by brett ebben at 5:22 PM No comments:

This past weekend was the four day Rocky Mountain Racing training camp in Fruita.  I departed Thursday morning by myself to get there as soon as possible to let the riding begin.  Rolling solo also gave me the flexibility to bring an extra bike and whatever I needed.  I got to 18 road around 1:30 and began to gear up for a ride.  I didn't see anyone and wanted to make the most of my time there, so I decided to head out for a little while.  I did a few loops occasionally lapping through by the main parking spot, but did not see any of the team.  After riding pretty much every trail there, most both ways, and logging in more than 3.5 hours, I decided to pack it in.  As I was leaving I saw the rest of the team, which I ended up riding with for another hour.

Friday mornings plan was to head to the Kokopelli trails.  40 mph winds made us constantly evaluate what trails we should ride and what the best direction to go would be. I rode with the lead group for a while, but after an hour or so, the previous days effort, and a kinked chain, it became difficult to hang on.  I ended up going to Over the Edge to get a new chain, which solved the last problem. 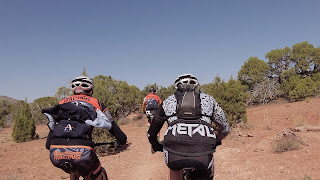 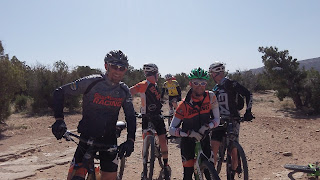 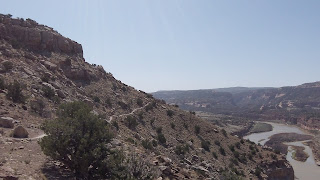 Example of trails and views 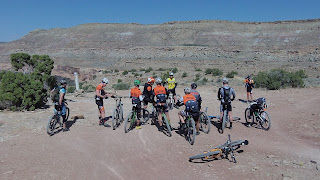 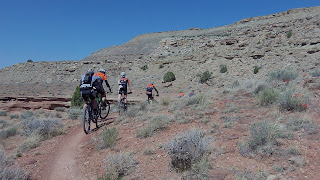 Sunday we rode the Edge loop at 18 road.  A few miles of singletrack leads to a 8-10 mile gravel road climb.  Towards the end of the road, the climb steepens for a constant 1,000 foot climb at 15% or so grades, which separated the pack.  I started up the climb and was towards the front.  I felt good the whole climb chasing faster riders without going to hard since I did not know how far the climb was or what was in front of us for the rest of the ride.  After the summit of the climb, there were two really fun sections.  The first was really loose terrain with 30% or so grades.  If you crashed, it would be ugly. I hung on and road it out.  It was great.  I smiled and laughed knowing I just rode a sick descent and any mistake would have cost me quite a bit.  After this descent, we regrouped for a long, loose, winding singletrack descent through desert type trees.  Later in the ride we got to the waterfall, which is a 45 foot multi-pitch rappel, see pictures below.  Some fun trails lead to an open area. 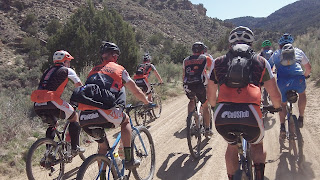 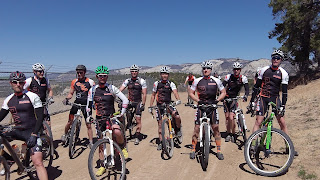 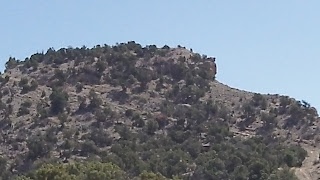 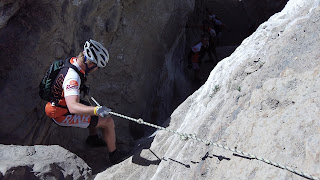 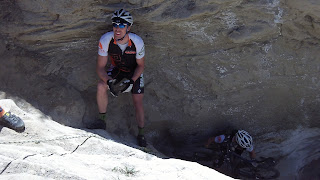 Careful with that bike! 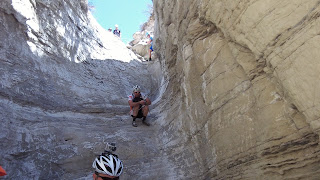 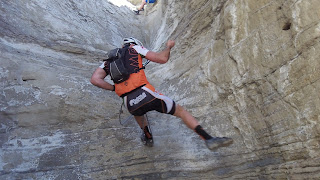 Sunday a small group decided decided to ride the Ribbon trail, which sounded like a lot of fun.   A long climb followed by a fun singletrack downhill.  A mile in the cable on my rear derailleur broke.  No long climbs on the singlespeed for me.  I ended up riding 18 road for 3.5 hours as I knew it was singlespeed friendly.  It was getting near the end of the ride and a long weekend as I lapped through near the car.  I was about to quit, but the Honeystinger team was there, and after getting a Honeystinger waffle hand up, I had to ride more.

It was a fun weekend great weekend camping and riding with RMR, my new team.  I got lots of riding in and rode a few new trails.  Our new team kits are pretty sweet.  Hopefully I can get at least one more weekend in the desert before it gets to warm.
Posted by brett ebben at 8:48 PM No comments: