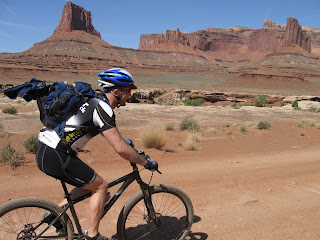 Side profile with ridiculous backpack 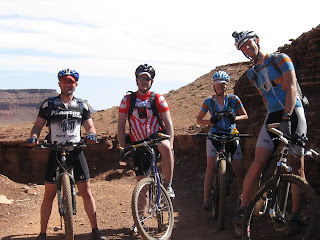 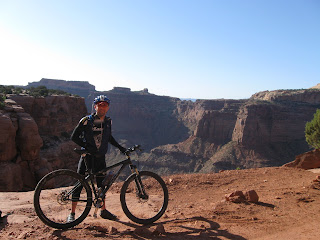 Early morning in the middle of the drop in
This past weekend Erik, Chris, Marni, Jeremy and I headed to Moab for a White Rim In A Day trip around the desert.  The forecast looked good with sun and warm temps.  And warm they where.  We made the initial climb up Mineral Bottom rd. to warm up and warm up.  I took my Gary Fisher Rig, which is a single speed, and used a 32x18 gear, which was perfect.  The start was a little difficult, but with the climb out of the way, my gearing was good for all but a couple climbs.  Even though it is a hard tail, it felt pretty decent on the descents as well.  The sun was bright and as the day went on the temperature approached 90 degrees, and there was not a cloud in the sky.  We ran into a couple groups that asked us how many days we were doing the ride in and where our support vehicle was.  I always get a kick out of this question.  The answer is one day, where as most do it in 3-4 days and are supported.  We carried everything on our backs, which usually works out.  By about mile 90, some in the group needed to stop at a campsite and ask for water.  The last mile or so is about 1 mile and a thousand feet up to the vehicles.  I was probably able to climb 75% or so with a mix of walking included.   103 miles of riding a single speed, 9:08 on the bike.  Riding the single speed on the White Rim was one of my goals for the season, and I finished and felt good afterwards.
Sunday we woke up and went to the Jailhouse cafe for a nice breakfast.  Chris and I climbed a couple routes up on Wall Street just outside of Moab.  The first route we did consisted of climbing a crack for a while.  The second had a couple tough moves with obvious holds after the third bolt, but Chris was able to get to the top anyway.
Posted by brett ebben at 7:21 PM