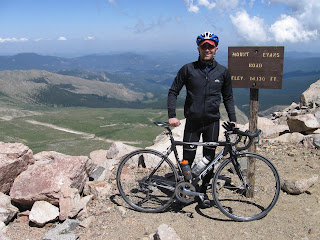 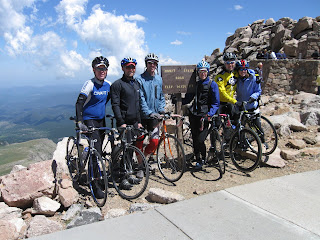 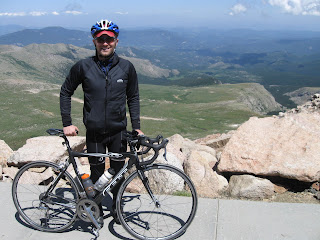 For August, Jeremy, Chris P., Erik, and I decided we would climb Mt. Evans. For a century. From Morrison. The elevation at the start of the bike ride is somewhere near 6,300 ft. The elevation of Mt. Evans is 14,130 ft. That is a lot of climbing. 10.900 ft counting all the ups and downs on the way to and from the car. We started a little after 7:30. Ouride started up from the beginning. It took about 18 miles to get to Idaho Springs, and we had to ride on I-70 for about two miles. We got maybe a few miles of downhill in the first 18 miles. My max speed was 49 mph during the second short descent. From Idaho Springs, it is 28 miles to the top. Though we restocked as we had some cars with food and water waiting for us. We started the next leg of our climb which took us from 7,600 ft to 10,500 ft. I started to set the tempo here, and due to the elevation and constant climbing, the conversation and screwing around ceased. It was time to work. We rotated through a bit and took a few breaks along the way. At Echo lake, we resupplied and took off again. It is 14.2 miles to the summit, and there are mile markers every mile. We thought it would be great fun with 3,500 ft. of elevation in front of us to sprint at every mile. I think Chris won the first mile. Chris and Erik crashed the second mile, and the fun continued. It took us 4:51 of ride time to reach the summit, which was really cold. Fortunately for me, Erik brought along more warm clothes than he needed, because I did just the opposite. The first leg of the descent is really bumpy with a lot of cars, really narrow roads, and tight switchbacks. It is ok, but really rough. The ride from Echo lake to Idaho Springs is just the opposite. We could carry a ton of speed through turns, keeping speeds of 30 to mid 40s. We had two climbs left once we left Idaho Springs, and they were not big, but they were painful by the time we got this far. The second hill climb was at the end of a stretch on the freeway. Erik and Chris started to sprint. I joined in shortly after. Erik won, and I was able to gap Chris a bit. After this, it was all downhill to cars and pizza. The weather was perfect. It was sunny, and warm at lower elevations, and we did not really ever get threatened by rain. There was a little headwind, but not bad. Michelle and Marni climbed from Echo lake to the summit. Thanks to Kim who drove the car the whole way bringing food and warm clothes.
.
Posted by brett ebben at 7:59 PM