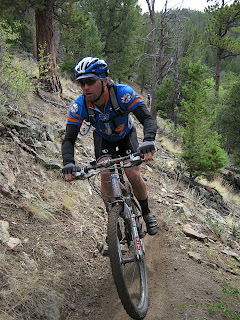 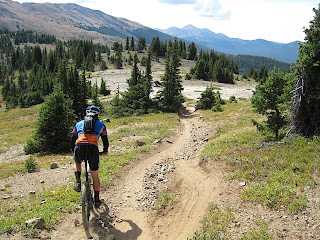 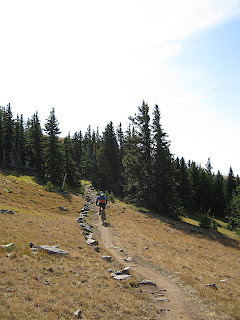 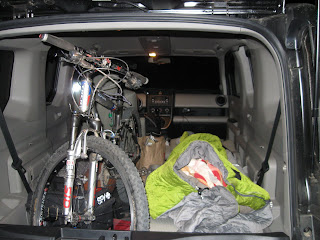 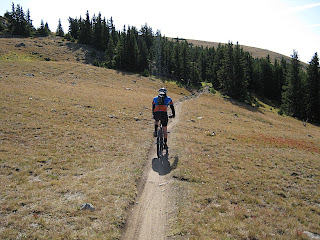 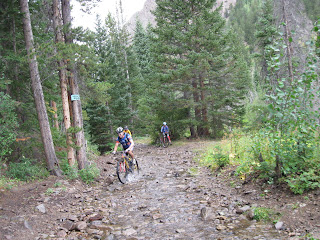 Its a trail, its a river 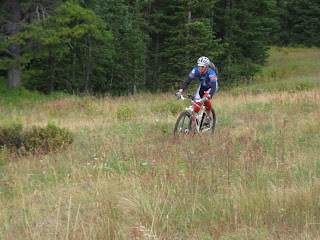 Chris on a hidden trail 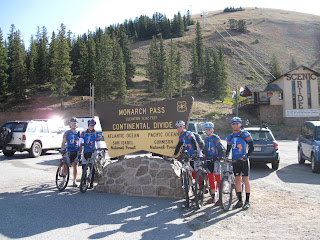 Erik, Michelle, Chris, Marni, and I
The Monarch Crest Trail is one of the higher rated trails in Colorado. This past weekend Erik, Michelle, Marni, Chris, and I set out to ride there. It starts at 11,300 ft, climbs to 12,000 ft, and then descends to 7,500 ft in about 33 miles. Typically, you would shuttle this with a vehicle on the top of the pass and one at the visitor center in Salida (more on this later). The day started nice and sunny, though a little cool, but that is to be expected at that elevation. The ride has quite a wide variety of terrain. We climbed for a while to start. The first extended downhill section dropped us 1,000 ft in no time. Most of the descents throughout the trail are rocky and contain a fair amount of roots. Some of them were really loose. We occasionally went through small scree fields. But there was nothing that was really tricky. After a while the the skies became overcast and there was light rain and thunder. In a bunch of places the trail was overtaken by flowing water. There was a fair amount of hail that missed us. At lower elevations the weather was better, almost warm for the last bit. The day went pretty well. The only thing that made the trip interesting was that the keys to the shuttle car at the bottom were locked in my car at the top. Fortunately there were many others out riding and I was able to get a ride to the top.
Posted by brett ebben at 7:31 AM