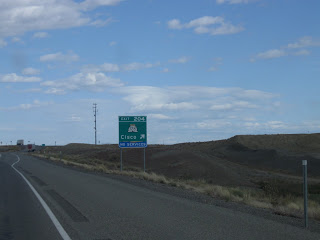 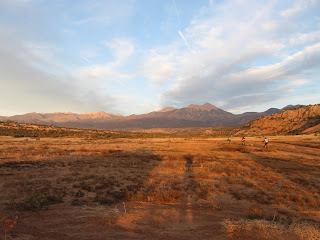 24 hours of Moab with the La Sal's in the background 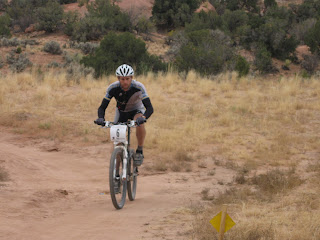 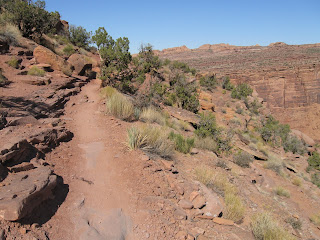 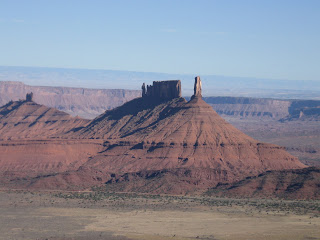 View from beyond the Jackhammer 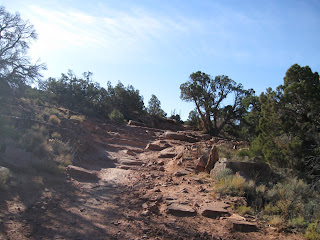 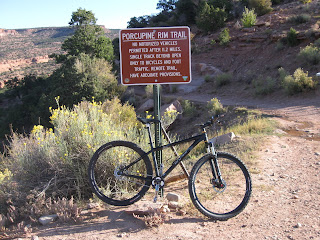 Porcupine Rim, GF Rig 32x18
Friday Ben, Amy, and I took a half day to head to Moab. Ben was going to race 24 hours of Moab solo, Amy was going to crew, and I was going to ride Porcupine Rim on my singlespeed. Once we got to Moab, we went to Paradox Pizza, and Fred took care of us. We had the Margherita pizza with sausage, and it was good. Friday night was a pretty easy night of camping at the racecourse and an early bedtime. Saturday we woke early to head to the Jailhouse cafe, which has great omeletes. Ben and Amy dropped me off just past the Slickrock trail so I could ride the Porcupine rim. It was 5 miles of climbing to the trail and then 4 more miles of climbing on ledgey rocky trail. Even with perfect temps, I was toasty and pretty beat once I got to the top. But after that, I got to descend 2,800 feet, so it was worth it. Porcupine rim is one of my favorites. The trail consists of pretty amazing views (is there one in Moab that doesn't?), lots of ledges to climb and drop, and lots of good sized rocks. It is pretty harsh for a hardtail, but I was fine except for a couple spots. I had the trail all to myself. I either beat the crowds and or no one was in town thinking the 24 hour race would draw to much of a crowd. Once I was done with the trail, I had about 20 miles to bike to the racecourse where my ride was. As I biked through Moab, I stopped at subway. The Moab Subway has to be the slowest dam Subways in the country. The last two times I went there it took at least 20 minutes to get a sub. Really?
Once I got back to the race, I sat around for a while and helped crew for Ben when needed. He started off decent, but kept riding straight through the night. There were only a few hiccups during the race. And they were quite minor. A couple flats that did not completely flat was the worst. The highs and lows of the race were amazing. Ben rode a consistent first 12 hours, but at about midnight when he lapped through seemed out of it. I am sure this is pretty typical, but he kept pedaling and fought through it. Because of his consistency, he ended up 11th overall in the mens 24 hour solo category. Awesome race. It was fun getting out of Denver, especially with a miserable forecast. In the past 6 weeks, I've been able to ride three amazing trails, Monarch Crest, Kenosha Pass, and now Porcupine Rim. FUN!
Posted by brett ebben at 7:39 PM