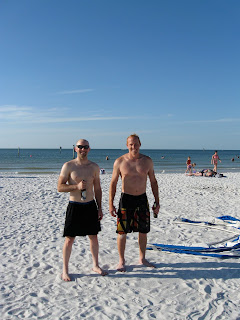 Brett and Andrew on beach with beer. 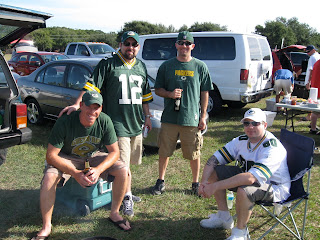 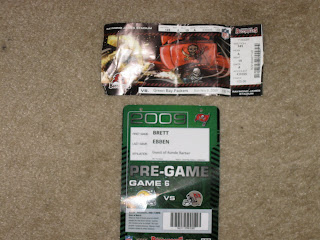 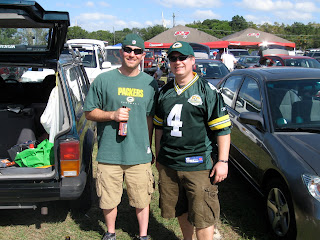 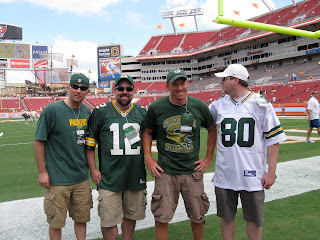 Brett, Andy, Andrew, and Mike on the field. 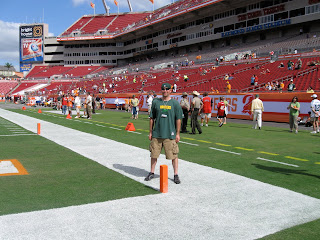 Almost on the field, and on the wrong side of the yellow lines 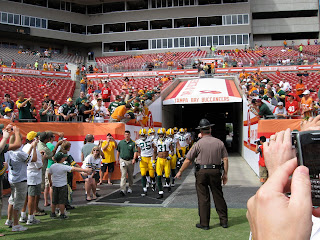 Packers coming down the tunnel 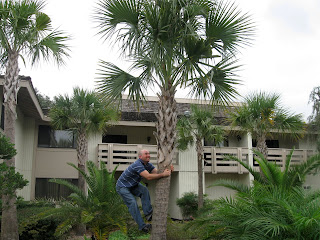 Climbing Florida style.
A week ago today I left for Tampa Bay Florida to hang out with Andrew Huebner, Andy Wylie, and Mike Jung and go to the Packer game. Both Andrew and Andy are from Neenah, my home town. Mike is a friend of Andy's. This year we stayed Saturday through Monday, an improvement on last years 36 hour car to car whirlwind trip to Florida. Andy and I got to Florida within 10 minutes of each other, which is pretty sweet considering I flew from Denver and Andy flew from Minneapolis St. Paul. Upon arrival we headed straight to Clearwater beach for beers, football, sun, and swimming. Saturday night we had dinner at a restaurant in the hotel complex and then were off to Channelside, which the valet recommended, for a few late night cocktails. Don't trust valet, as Channelside was not where it was at.
Sundays pre game meals consisted of egg and sausage bagel sandwiches on the grill. Then we made brats and burgers. It was a tailgate setup that would have been perfect at Lambeau field. Erik Roach stopped by as we were eating. Erik is a friend of mine that I've not seen since college. Per facebook we both realized we were going to be at the same game. It was nice catching up with Erik, who now lives in Orlando and has a successful chiropractic office.
Andrew got our tickets from some guy named Rhonde Barber. I think he plays cornerback for the Tampa Bay Buccaneers. We also got media passes to go onto the field for an hour before the game. All I can say is kid in a candy store. It was pretty much a dream come true being on the field on game day along with both NFL teams. I was able to high five most of the Packers as they ran out onto the field. It was amazing to see how big the players are. Once that was over, we found our seats. They were in the end zone on the same side as the pirate ship. The game had its moments, but overall was quite disappointing. Two years in a row I've gone to Tampa Bay to watch the Packers play, and two years in a row they've blown the lead late in the game. This was especially disappointing as the Bucs were 0-7, and we thought the Packers were playoff contenders. After the loss, we went back to the hotel. While watching Sportscenter on ESPN, I saw the four of us in Packer lowlights. It was a fun weekend and Rhonde Barber is my new favorite Buccaneer for hooking us up with sweet tickets and Media Passes to on the field. I doubt the Packers will be in Tampa next year, so I look forward to heading off to a different warm weather city to watch them. And hopefully I will get to fly back after watching a win!
Posted by brett ebben at 3:09 PM