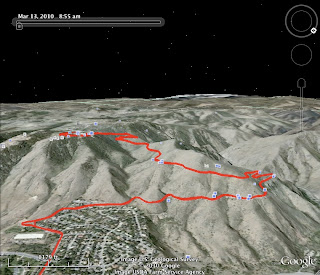 Saturday was the start of the Death Matches, which is a timed ride up Lookout Mountain. The climb is a little over 4 miles and 1,200 ft of elevation. Yesterday we had a great turnout with I think 9 from the team and Ben. Lookout Mountain is at the base of the foothills by Golden Colorado. It is one of the rides I do right from home. By the time I met up with everyone else, I already had 23 miles and 1,200 ft of climbing. I felt pretty tired on the ride there. The idea of the Death Match is to start people according to speed so that everyone gets to the top about the same time. Its a great idea so that people of different fitness levels can gauge improvements against each other. I rode at a pace that I felt was just below cracking the whole time. My finish time was 24:50, which I was happy with considering how I felt that day, my ride time to the start, and and the fact that I've just started doing speed skills a bit. Erik, Bill, and I stuck around for a second lap up. The temperature for Saturdays ride started out in the mid 30s when I left but got up to the low 60s upon returning home. 64 miles and about 4,500 ft in elevation gain for the day.
Posted by brett ebben at 12:25 PM