Actual video from 5/21/11 concert
Well, for the most part anyway.  Eric and I wanted to get a long road ride in with a fair amount of climbing.  I barely rode my bikes in the last two weeks as I needed some time for recovery and then got pretty sick.  We rode up to Golden to climb Golden Gate Canyon as high as we could before weather hit.  Our climb ended at about 8,600 feet when we ran into 45mph winds and a wall of snow.  Yes, that is right, it was snowing.  Back down to Golden for a quick coffee to warm up from the descent.  Temps were warm and the rest of the ride was pretty uneventful.  It felt good to be back on the bike even though I felt sluggish the first few hours.
Michael scored tickets for the U2 360 concert Saturday night at Invesco (where the Broncos try to play football).  They were General Admission, so they were cheaper than most of the tickets available.  Why, I don't know.  We were able to get pretty close to the stage.  Two of Michael's friends went with us, and they had some sort of VIP pass that enabled them to a party inside the stadium.  The passes did not have names on them, so when they got back, they handed them off to us.  We got a hand stamp and headed in for a quick beer.  Apparently the stamp was our "ticket" to go to a inner section close to the stage.  Sweet.  The Fray (couldn't care less) opened for U2, so we took advantage of our stamps.  We ended up getting within about 15 ft of the stage by the time the show started.
The sun set on an amazing spring Denver evening just before U2 was to take the stage. U2 went all out for this show/tour.  The stage was huge and took up about 40 yards of the field.  Setup took 4 days and required 54 semi trucks to move everything for the stage.  It looked like 4 claws and housed all of the sound equipment and lighting equipment.  They played for about 2 hours and it was amazing.  Denver Post's story.
Set list
Main Set: Even Better Than The Real Thing, I Will Follow, Get On Your Boots, Magnificent, Mysterious Ways, Elevation, Until the End of the World, All I Want Is You, Stay, Beautiful Day - Here Comes the Sun, Pride, Miss Sarajevo, Zooropa, City of Blinding Lights, Vertigo, I'll Go Crazy (remix) - Discotheque - Please, Sunday Bloody Sunday, Scarlet, Walk On - You'll Never Walk Alone
Encore(s): One, Will You Still Love Me Tomorrow - Where the Streets Have No Name, Hold Me Thrill Me Kiss Me Kill Me, With or Without You, Moment of Surrender 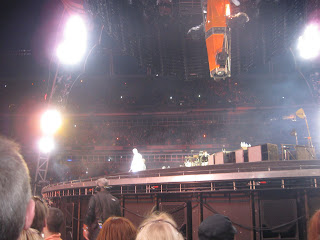 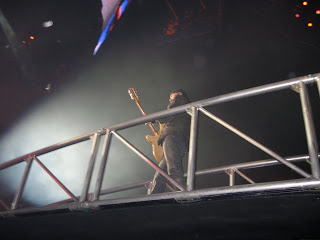 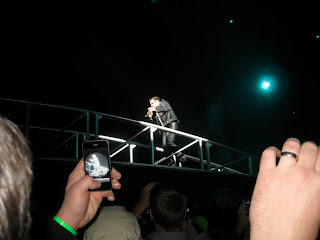 Bono on a moving platform 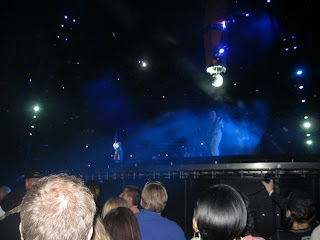 Adam Clayton on bass with Bono with the light up mic
Posted by brett ebben at 5:17 PM