No racing this June.  Its been a really good thing for me.  I started the month very tired from an aggressive early season schedule.  The idea for June was to recover and rebuild.  The focus is to prep for this, this, and, this.  I've increased speed work, climbing, and gear testing. 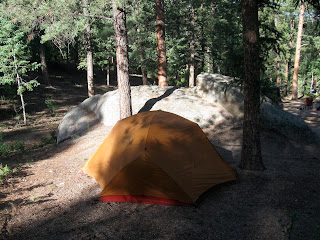 Friday nights campsite at about 7,800 ft
Friday I went up to Buffalo Creek to ride the single speed for three hours and to camp a bit higher than where I live. Friday nights ride.  It worked out well as Ben and Tim were racing the Bailey Hundo.  I rode about three hours Friday night and ended about 30 minutes after dark.  I explored some more of the Colorado Trail and about 15 miles of singletrack from the race. 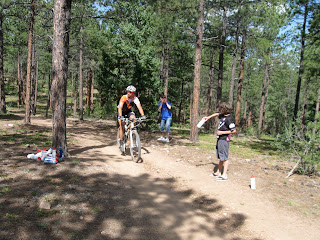 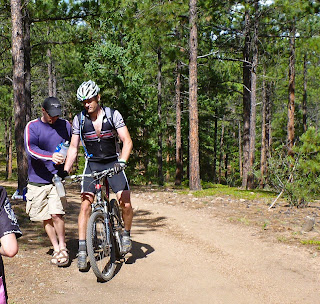 Handing off water bottles to Ben
Sunday Jeremy and I headed out for a 100 mile road ride.  I wanted to get as much climbing in as possible.  Rain and weather made us kind of improvise and limited climbing, but it was a good ride.  This 100 on the road bike marked 42 months in a row with at least 1 100 mile ride.  The next two months could be tricky with my schedule though.  Ride info here.  I think next time I will add in shadow mountain so I don't have to mess around in the city as much. 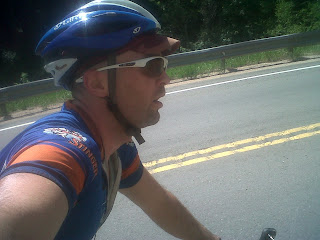 Climbing High grade.  It was nice and hot while we climbed.
Posted by brett ebben at 6:53 PM