Saturday September 17 was the 29th annual Chequamegon Fat Tire Festival (8th in a row for me).  The "40" is the biggest race in the midwest and attracts riders from all over.  This year Christian Vande Velde (Cervelo Garmin) and Jason McCartney (Radio Shack) took the line. I made the journey to the Great North Woods of Wisconsin by myself this year, which gave me a little more flexibility so I took another day off of work.

After the long drive I got to Eau Claire Wisconsin mid afternoon to spin out the legs and to meet Jim.  Perfect temperatures and dry ground made for a fun ride.  Afterwards we met up with my parents to find a place to stay and get some dinner. 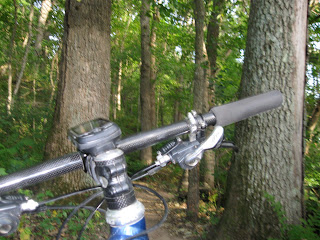 Close trees and wide handlebars, I probably hit 3 trees between Thursday and Monday 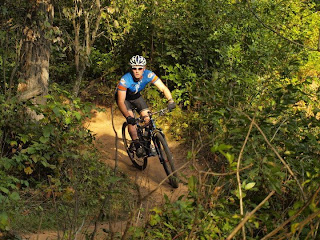 Lowe's Creek Eau Claire-tight, twisty, fun
Friday morning the drive continued on to Hayward, Wisconsin to meet the other Fat Tire participants.  I pretty much parked across the street from the Angry Minnow where Nate, Kim, Paul, and Melinda happened to be eating lunch.  After lunch I found the cabin and got settled in until it was time for registration.  After a long season highlighted by finishing the CTR, my approach to this race was somewhat ho hum.  Its amazing what pinning a number on my bike did to my mentality.  As soon as #628 was on the Lev, there seemed to be a flip of the switch.  Baked Ziti, a visit from a couple friends fresh off the Boundary Waters trip, some time spent race strategizing, and it was off to bed.
The 4:20AM wake up seemed crazy, but row three staging was worth it.   Jesse, Erin, Justin, Jeremy Vogels, and I all had solid placing.  The 10AM start is unlike anything I have ever seen.  1,900 plus mountain bikers rolling down the crowded streets of Hayward makes for quite an experience.  Starting, slowing, turning, turning into roads with medians, and then finally the right hand turn to Hwy 77.  This is where the race truly opens up.  Speeds in the upper 20s on mountain bikes!  I ran into Jesse and Erin, and we picked the pace on 77.  I think this is the hardest I ever went off of the start, but I felt good.  I backed off a little before the turn into Rosie's field where the race hits dirt.  The trail is wide open and bumpy, but after the first decent, I turned it back on. 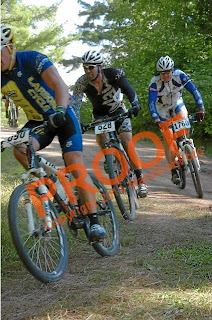 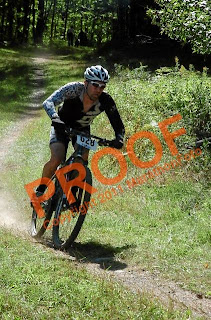 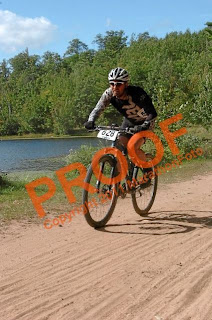 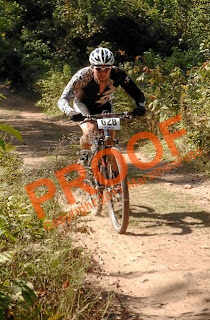 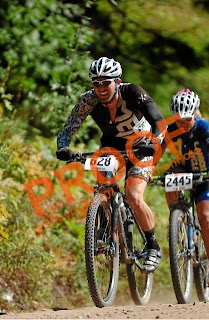 My turn to pull, going all out 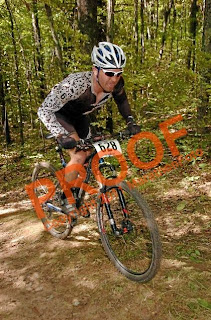 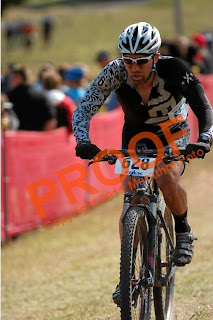 Completely gased at the finish line
At this point Nate (preferred start), Jeremy, Jesse, and Erin were all in front of me, but I could see a couple of them from time to time.  I decided I would let the race come to me instead of attach them this early.  9.5 miles in I picked off Nate.  The next 15 miles would be pretty consistent.  Work the rollers, push it up the hills, work in groups when I could, and let if fly on the descents.  Mile 25 I passed Erin.  Mile 26 or so I passed Jesse on the false Firetower climb, which is the hardest point in the race.  I think the actual climb starts about mile 28 or so, which is where I passed Jeremy.  Its loose, rocky, and has 3 steep pitches (upper teens for grades).  I was weaving in and out of riders up this tight two track climb, often picking the worst lines because it was the only free area.  By the time I got to the top, I was with one other rider.  We passed many riders and put some distance on a group of 10 or so I began the climb with.  I typically redline up this climb as there is a nice recovery descent on the backside.  If I soft pedal down this I keep moving pretty well and usually open up gap on those surrounding me at the top.  Mile 32 I started to cramp and pop though.  I had gone pretty much flat out from the start.  My legs were not used to such an effort.  I was worried.  I did not really have the extra gear I had in years past as I spent the whole year training for 5hr plus races and really only had 2 weeks of solid training since recovering from the CTR.
From mile 32 on I was frequently looking over my shoulders.  Mile 34 I stopped at an aid station and downed 6 cups of water, which helped a lot.  I began to regain my composure as a fast group flew by.  I latched on and even worked in a few times.  We were flying, and I even got a little recovery when I got to sit in.  A strong finish lead me to a time of 2:31:52.  Not a PR, but it was my best ever placing at 173 overall out of 1919 finishers (27/161 age category).  The coarse was in great shape, maybe even a little to dry and loose.  I was thankful that I used a Schwalbe Rocket Ron on the front.  The Stan's Raven I used last year would have made things a bit difficult with limited traction up front.
Race stats here.
After the race I ran into a friend I had not seen since college.  We both noticed that we would be racing based on a post on Facebook, one of the actual real benefits of that.  It was his first race, and he had a blast.  Post race BBQ at the original Famous Dave's, fires, and drinks highlighted the evening. 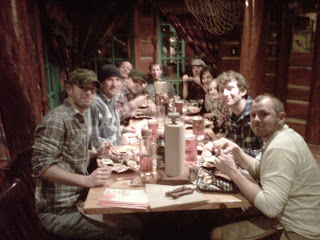 BBQ and flannel
Sunday after parting ways I met up with Jim again.  The plan was to ride bikes, but rain spoiled our fun.  We mulled around at a local bike shop for a while and then found a spot to watch the Packer game.  I think the record player stopped when we entered the bar.  Everyone there was huddled around the oval bar in the middle, no seats outside the bar area were filled.  The walls were covered with NASCAR signs and many signs for many sports teams.  After a long day, all I wanted was water.  I asked for a pitcher, and apparently there was not one behind the bar-the bartender had to go to a back room to get one.  I asked for a menu and was promptly given a strange look.  Guess the grill wasn't on today?  Oh, then I noticed it was a potluck lunch and everyone was to bring a dish.  Really, who does this?   Needless to say, as soon as the Packer game was over, we got out of there.
Mondays weather was much better.  Jim had ridden the Hatchery Creek trail system and thought it would drain well, which was true.  The trail consisted of deep forest twisty fun rolling singletrack (need more adjectives?).  The trails also crossed the beginning of Saturdays race.  I saw the trails during previous races and always wondered about them.  I would definitely go back. We also rode a bit of the race course, which was kind of interesting since I was on my single speed mountain bike. 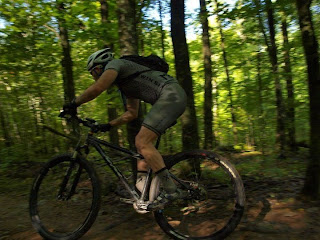 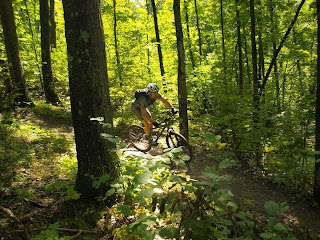 Eight Chequamegons in a row.  Its been a good tradition.  Its always nice to see my parents and friends I used to race with and against.  The Great North Woods of Wisconsin are always a good time, and I regret not exploring them more when I lived in Wisconsin.
Posted by brett ebben at 6:50 PM