White Rim In A Day has seemingly become an annual event.  Back in 2008 it was my first century, first century on a mountain bike, and it was my first look at endurance mountain biking.  Its also become a nice early season measuring stick to see where my fitness is at.  Its also a great single speed ride with amazing scenery the for the majority of the ride.  Eric and I decided it was time to get out of the city, head to the desert, and see if the early season training has paid off. 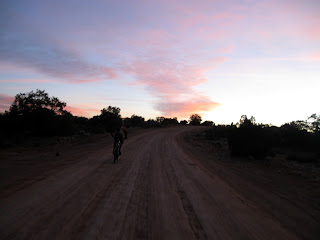 A long day at work and a long drive put us at camp at about 11PM Friday night.  As soon as we arrived I found a nice soft spot in the sand and laid down for a few hours sleep.  5AM arrived and it was time to get moving.  I started pedaling a couple minutes after 6 and the gradual climb up the dirt road warmed me up quickly, which was nice as the sun was yet to rise. 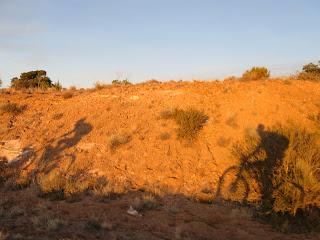 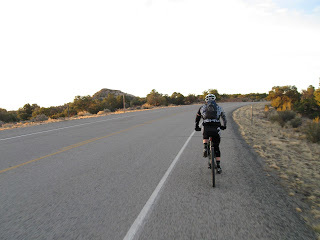 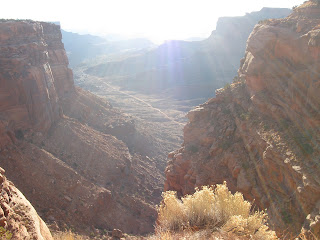 The trail is down there somewhere 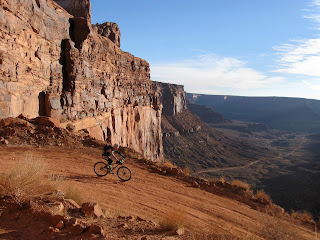 The day was shaping up very nicely.  As we reached the end of Mineral Bottom road we were greeted with a nice sunrise.  The forecast for the day was a high of about 80, and it seemed to approach that early on.  As a single speeder, the first 35 miles or so presents a few good challenges with longish consistent climbs.  I was able to get through these sections and still feel good.  My personal goals for the day were to try to ride consistently and try to stop as little as possible.  If I reached my goals for the day, I will up the ante by riding a bigger gear the next time I take the single speed for a lap (32x17). 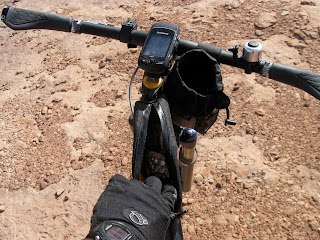 Part of being able to ride consistently is eating and drinking on a regular basis to keep fueled.  I brought my Mountain Feedbag and filled it with Honey Stinger bars and my camera.  I stuffed my gas tank with cookies.  Both of these allowed me to eat as I was pedaling.  I also tried to bring less stuff overall so I would not have as much weight on my back to slow me down. 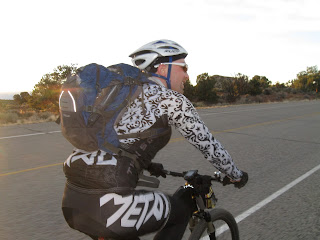 Along the way we encountered a group of riders from Salt Lake City who were doing a 3 day trip.  We ended up riding with them for 20 to 30 miles.  It was nice having some added company and their group  seemed really nice.  At about mile 64 I came within a foot of getting "doored" by some lady in a Sportsmobile.  This is probably the closest I've ever come to getting hit by an opening door.  Then came the lead up to Murphy's, a series of 4-5 pretty steep but short climbs.  I made all the climbs except 1, which I could not get because my tire spun out as I was out of the saddle in an attempt to just turn the pedals over.  The final climb up Murphys is when single speeders use their third gear, hiking.

Murphys is a great place to eat lunch and take in the view as its the high point in the area and 67 or so miles in.  The SLC riders were arriving at the same time.  Eric and I decided to hike a little ways from the road and sit on some rocks for lunch.  We heard someone in the SLC group say "Coke" shortly after their support vehicles arrived and we got excited.  How nice would it be to have a cool sugary soda in the middle of the dessert!  After talking about it for a few minutes, I gave Eric $2 and said "I buy, you go get Cokes."  A couple minutes later he came back with ice cold Dr. Peppers! 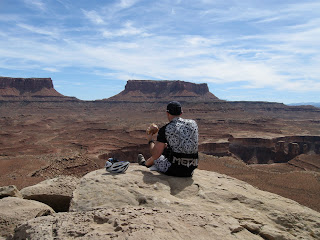 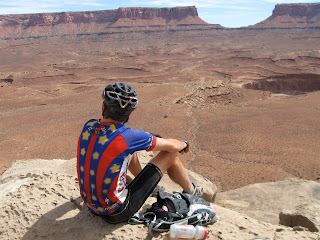 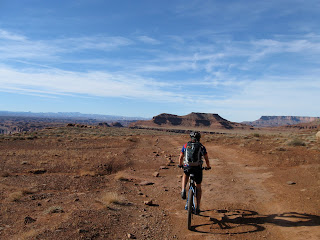 Their is a nice descent down the backside of Murphys and a few smaller hills shortly after that.  The time seemed to fly by and it was evident that both of Eric and I were still feeling pretty good, especially after lunch and a soda.  Hardscrabble is the next big challenge around mile 87.  This again is mostly a tough climb that turns into a hike.  After Hardscrabble, the main challenge is the final climb.  1.5 miles and 900 or so feet.  I was 0-5 going into this ride.  As the miles ticked off, the anticipation grew.  I've wanted to clean this climb for years.  I made sure to drink often leading up to the climb.  I made the turn and started up.  It was a struggle to turn the pedals.  I had to stand the whole way up just to turn the pedals over.  My breathing was labored.  Once I got to the final switchback, I knew I had it.  Even as I got to the car, I knew I could keep riding if I had to.  The climb and really the whole ride seemed much easier than before.  I think I passed the test.  I finished with 41 minutes less of ride time than any of my previous laps of the White Rim.  Next single speed lap will be done with 32x17!  Data here. 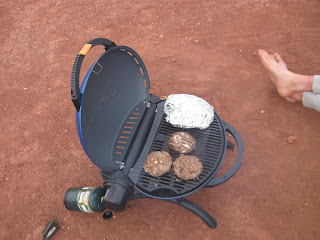 Burgers and vegies on the grill! 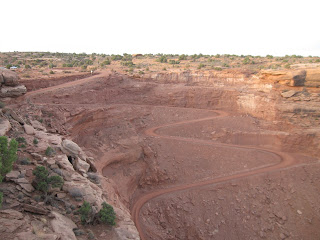 Top part of the final climb 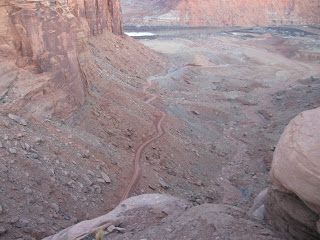 Beginning of the final climb