July 4 Fireworks in Breckenridge started at 9:32.  AM.  The Firecracker 50 Expert 30-39 field was the second wave of racers to begin the July 4th parade and two lap 50 mile race.  The road lead out and 6 mile climb up Boreas Pass separated the field early.  I rode conservatively consistent on the climb and worked in with a few riders as we gradually picked off riders that could not keep pace.  I rode well and let it go on the downhills as much as I could handle on the hardtail with sort of numb hands from a couple big early season rides.  I had a small crash, but besides that, the first lap went well and I lapped through earlier then I expected. A very quick pit thanks in part to Eric, who handed me two new bottles, and I was off.  The second lap was a little slower as I felt a bit tired.  A friend offering encouragement on Little French Gulch kept me moving up the rocky, steep, loose climb.  One of my water bottle cages broke, so I had to stop and "fix" it.  A case of chain suck due to the dry course slowed me for a few moments also.  I actually thought I was not going to be able to get my chain free after a few moments.  I was pretty worked the last 1/2 of the second lap, but still managed a solid time.  I was a bit faster then I thought, but it was hard to compare times from this year to last year as the course was a little bit different and probably faster.  I was 50 minutes faster though, and am happy with the result. 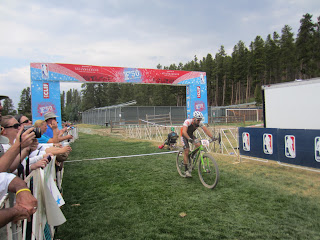 The Breck100 a week and a half later was a far different story.  I didn't ride much between the two races since they are both fair efforts and I wanted to be fresh for the Breck100 which climbs over 13,000 ft.  I took the start line Sunday morning at 6AM with questions on how recovered I was and if I was ready to rock.  30 minutes into the climb I knew it was not my day.  The two previous years I had to hold back the effort on the climb up to Wheeler Pass.  This year I could barely turn the pedals over.  My heart rate was really low and I could not get it to the zone I normally climb in.  I couldn't even get it to my normal endurance effort.  I continued on with the hope my body would come around.  Who knows.  Sometimes it takes a few hours.  My lap one time was slow.  I didn't feel right.  And I didn't feel another 70 miles.  I pulled the plug, which was difficult to do.  It had been 4 years since I DNF'd at a race, the last being a triple flat day.  I was pretty disappointed I was not ready, but I think DNF'ing was the best idea as I did not want to dig a deeper hole and not be able to get out of it for a while.  Some days you have it, some days you don't.

I took five days off the bike after the race, which was mentally challenging.  This past weekend was the Courage Classic Children's Hospital fundraiser, and I wanted to make sure I was ready for a good weekend of riding in Summit county.  Most of team GTRI stayed at a condo that we rented in Frisco.  The goal was to ride from the condo each day.  The start line for the day one route was in Leadville, 31 miles from the condo and over Freemont pass, which was almost 2,000ft higher than our start.  Tim and I rode to the start and got going a little later then we planned.  Most people probably started IN Leadville before we started in Frisco.  Our pace was a little different, so we each rode on our own.  Turquoise lake is surrounded by 12,000ft peaks and a thick pine forest.  The ride around the lake consists of steep climbs and descents.   Flat sections don't really exist here.  I was tired and uncertain how I would react to big rides less than a week after having nothing, so I took it easy on the way back to Frisco.  Ride data here.

Sunday's ride was 100 miles.  It was a lot of riding on Summit counties elaborate bike paths and then out to Ute Pass, which was a new climb for me.  I felt pretty decent for the first couple hours.  I worked in with a pace line before the Ute pass turn off to save energy and keep moving.  I worked to the front a few times, even jumping ahead when it seemed to slow down.  When I was at the front I was keeping speeds between 25 and 35mph, which surprised me quite a bit.  The route had us going up and over Ute pass and turning around when the rough pavement turned to gravel.  Its a nice climb from both sides.  I don't think it ever got over 8% on either side.  A little rain for a while was the only notable thing for the rest of the ride.  Ride data here.

Mondays ride started off quite painful.  Turning the pedals after 180 miles the previous two days was brutal.  It took about 30 to 40 minutes for the legs to come around a bit.  The steeper pitches up Freemont Pass forced a greater tempo.  My "pacing" for the long ride turned to an all out effort to the top 15 miles into an 80 mile ride.  I used the frustration from DNF'ing the week before to keep the pace up.  The ride was very similar to Mondays ride, but this time it was supposed to end in Leadville.  That was our lunch break before the final 31 miles back to the E.  A quick coffee stop for some extra fuel and we were on to beat the rain and lightning.  My legs felt great climbing up to Freemont.  I reached a new top speed on the bike on the ride down, 58.1mph.  Monday's ride here.

The Courage Classic was a great weekend for a great cause.  My legs felt good for most of the weekend, and I really needed a good weekend of training.
Posted by brett ebben at 7:40 PM