Last winter I missed out on making a winter trip to one of the 31 10th Mountain Division Huts.  Eric, Dru, Ben, and four of his friends and I signed up.  Dru, Eric and I departed Denver at about 6AM Friday morning, and the other crew was about 3 hours behind.  After a few stops on the way we managed to find the parking lot.  I had a couple maps which we thought would be helpful.  The McNamara hut was new to all eight of us.  The Hunter Creek Trailhead has lots of spurs nestled in the very expensive surrounding Apen neighborhood.  The three of us trekked on talking away and checking the maps as needed.  After about an hour and 45 minutes and very little elevation gain we ran into a local skier and 5 dogs.  She was quite surprised to see us out in this part of the woods and commented that she never saw anyone else there in the winter.  She also told us that we missed a turn about 2 miles back....  We realized that we could not trust our maps and better pick up the pace a bit.  The forrest service road that we were supposed to turn on was a steady climb with a couple trails that shot off to either side.  At about this time I got a pone call from Ben, who was calling to find out why our tracks suddenly ended.  I told him what we did and where to go.  Typically the trails to the huts are marked with blue diamonds.  Not one blue diamond had been seen at this point and daylight was ticking away.  The climb continued.  Finally there was a tree marked with a blue arrow, which all of us agreed it had to be the way.  At this point I was kind of on a mission.  My goal was to get to the hut before darkness and cold set in.  I broke trail the whole way and pushed the group as hard as we could go.  I saw a few blue diamonds throughout the push, but they were few and far between.  The first large meadow we encountered did not have any indicators of which way to go before the open space.  I hugged the treeline to the left but avoided a small depression.  After breaking trail through knee deep or better snow the group made it to another section of trees on either side of the "trail."  No blue diamonds, hmm...   So much for guidance and reassurance.  I carried on and still did not see any sign of an actual trail.  Eric changed direction to see if the trail went another way.  Dru stayed in middle and acted as a go between for communication purposes.  After a 200 yards or so I finally found another diamond and I yelled as loud as could to communicate my find.  From here on the trail was quite easy to follow.  Thick pine trees covered in snow were on either side of us, but the climb still continued.  I started "seeing" a hut through the trees.  They always turned out to be mirages.  Darkness would probably become a problem between 4:30 and 4:45.  I was starting to get nervous.  We knew we were on a trail, but not once did we see a sign that confirmed we were on the trail to the correct hut.  At about 4:25 I saw a sign that said Hut Boundary and soon turned a corner to see the hut.  I was relieved to see the hut just before dark.  The door had a combination lock on it.  I memorized the code and dialed it up.  No luck.  Jostling the lock did not help.  Eric soon turned the corner and he read the look of disbelief on my face.  I did not need to say anything.  The door did not open.  I tried again and reset all of the numbers and the door opened!  Six hours and 11.2 miles and our journey came to an end.  Inside the hut the thermometer read a balmy 35 degrees.  Fire was the first thing on my mind.  All three of us huddled around the wood burning stove drinking warm tea that Dru made in an attempt to warm up.  Ben and his group followed our tracks to the hut and arrived at about 6:15.  The eight of us had the hut all to ourselves Friday night.

Saturday morning Ben and crew hiked down as they were only staying one night.  Relaxation was on tap for the morning.  The early afternoon adventure was to summit Bald Knob.  Dru, Eric, and I cut straight up looking for the steepest pitches to get us to the top.  The views were worth it.  We saw Aspen Mountain and several other cloud covered mountains.  The hut was full (16 people) Saturday night.  A group of 10 came up from Carbondale and Glennwood Springs.  Three others from Boulder also made the trip.  I met someone from Tomahawk WI that knows a few of my friends that grew up there.  It was a fun night.  Later at night Eric, Justin (from Carbondale), and I made a pretty sick sled run through the woods.  Sunday morning the run got a little out of control as the mist made it very fast.

It was a great weekend.  I pretty much don't like winter and snow, but I know I would really miss weekends like this if I lived in a place without winter.  I just hope it continues to stay in the mountains. 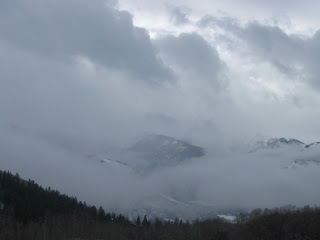 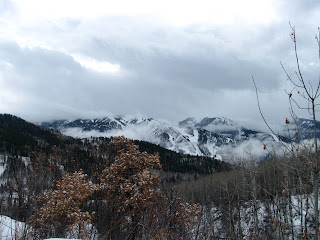 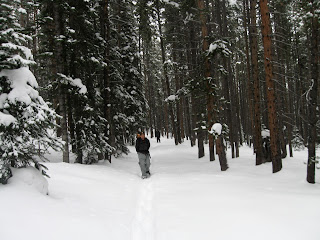 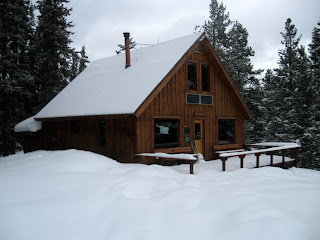 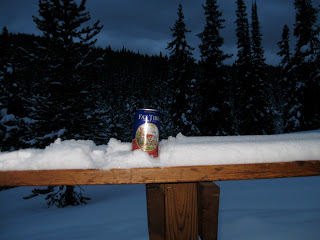 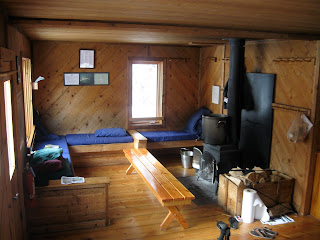 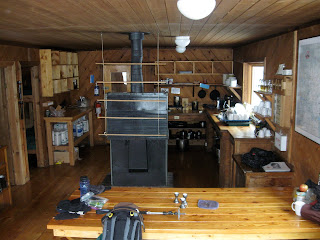 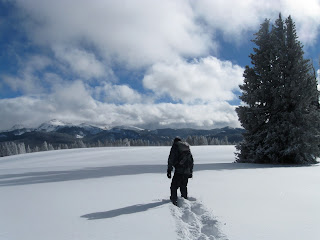 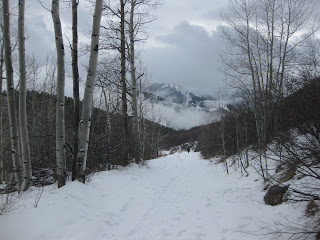 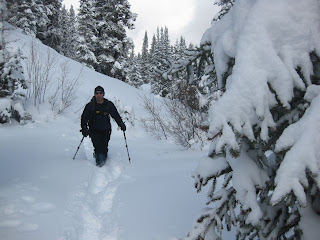 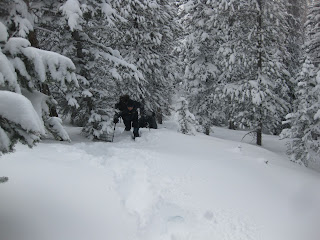 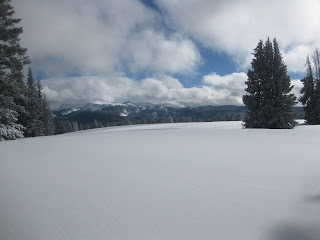