Two big races in May and my results in both races lead me to do a fair amount of thinking about where I am at and my performances in both races, which explains my delay in blogging about them.  May 12th I raced 12 Hours of Mesa Verde and May 27 raced The Original Growler.

Friday morning I departed for Cortez, which is about 45 minutes west of Durango, to set up shop and check out the course for 12 Hours of Mesa Verde as I was racing this solo.  I am glad I did this as there were definitely some tricky spots on the course.  I was able to clear everything in my pre-ride, but I knew there would be many spots that would force most riders off of their bikes.  It was also good to know where I would be able to consume fuel.  The start of the course had some punchy climbs and quick winding descents.  The middle of the 16.4 mile course was very rocky and had lots of step like features and drop offs.  And the last part contained really steep rollers that if you let it rip down you could easily roll up over.  Parts two and three were difficult to drink bottles during. 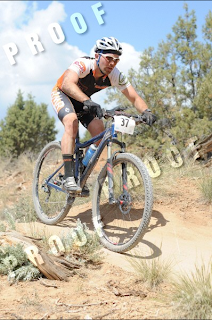 A windy Friday night did not set things up well as my tent was flapping around all night and I got very little sleep.  As the sun rose so did I as I was very excited to turn laps on a fun and challenging course.  The race started off with a 400 yard or so le mans style run, which was probably my longest run in 10 years.  Long races like these I find quite funny.  My plan was not to burn to many matches, so every climb I was pacing myself with what I thought was an ideal heart rate limit.  Downhills and technical sections, not so much.  This is where I would let it rip.   I ticked lap after lap off and was pretty consistent right around 1:40 for the first three or four laps.  As I lapped through I would grab a bite to eat and I made sure to drink a bunch of water, Powerade, and Coke as it was pretty warm out.  Lap five even went pretty well, but I was falling off.

Lap six was another story.  I was not riding technical features very well, and had to walk a few difficult sections that was I was clearing earlier in the day.  My mind was tired.  My body hurt.  Funny thing is my hands, back, and arms hurt more than my legs from the constant jarring of the course.  The last half of the sixth lap shifting even became difficult.  I lapped through at 10:33 minutes.  I was pretty certain I had enough.  Most 12 hour races you have to finish the last lap before 12 hours.  This race was different.  As Long as I went out by 6PM, I could have taken as long as I wanted.  Due to my deteriorating condition, I decided to pull the plug.  99.9 miles was a pretty fair effort.  I also had 10:15 minutes of moving time in 10:33 minutes, which I was very happy with.  I did not think another lap would have been good for all parties involved, but the thought of turning another lap still lingers in my mind.  The way I looked at it at the time I could have finished 12th to 14th had I done a seventh lap, so I did not think it was worth it.  I ended up 19th of out 40 riders.  Garmin info here.

The course was a lot of fun.  The race was well run.  But I am not sure I will show up to this again as it is a pretty fair ways from Denver and took a while to recover, which leads into the Growler.  Lynda Wallenfels, a well respected cycling coach, states it takes two to three weeks to recover from such an effort.  The start of the Growler was 15 days after 12 Hours of Mesa Verde. 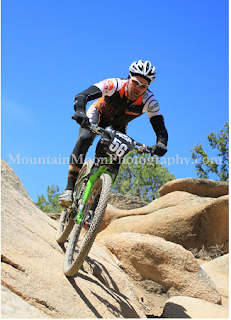 The week after 12 Hours of Mesa Verde Tim and I went to Gunnison to ride a few laps at Hartman Rocks, the site of the Original Growler.  I had two goals for the weekend: become familiar with as many of the technical spots of this course as possible as this is the most technical race on the schedule and determine if the Niner RDO was the bike to race.  I sessioned many of the tricky sections and figured out the lines that I could ride and determined what sections were hike a bike for me.  At the end of the weekend I was also not beat up, which was great since I thought the Niner would be faster if I could handle riding the hardtail. 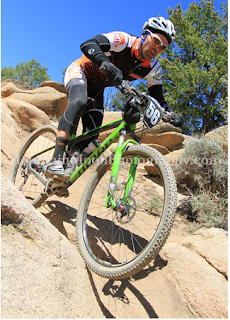 On to race weekend.  A few rides on Friday and Saturday around the course made me feel even better about my previous weeks reconnaissance trip.  Crazy winds kept Saturdays riding to a minimum and forced us to head out to eat dinner.  Sunday morning was cold.  The game time temperature was somewhere around 35 degrees, but it wasn't windy.  I rode in the middle of the pack on the four mile road lead out.  Once we turn off the road and onto the dirt, the race officially starts.  Kill hill, which is a gravel road with really steep pitches, instantly separates the pack.  Two thirds of the way up I found a clearing and decided to go.  I actually felt good and my legs were responding.  I ended up putting in a good effort for a while and got in with a fast group.  15 or so miles in I wasn't sure I could hold the pace of the group I was riding with.  I noticed a few Pro ladies and a couple other strong riders were in the group, so I decided to back off a bit.  Even though my legs were a bit heavy, I kept a solid pace and rode most features well. 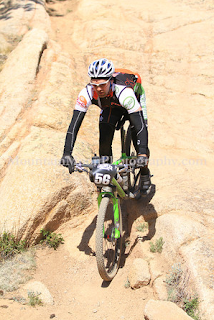 I lapped through at about 3:40, ate some food, exchanged water bottles and took off on the initial climb.  It hurt.  I was fairly conservative on the start of the second lap, maintaining a pace I knew I could hold for quite a while.  The riding became more difficult as my legs became more tired.  I seemed to be passing more riders then were passing me, which made me feel good.  I also gapped the group of riders I started with on lap two.  Halfway through I started doing some math and I thought I had a shot of being sub 7:30, which I thought would be pretty solid all things considering.  I knew where I was at and roughly what I had left to go and in the tank.  I increased the effort a bit knowing that if I cracked, I would have left it on the coarse, but if I finished in time, the increased effort and pain would be worth it.  I rolled in at 7:29:04 completely crushed knowing I gave it my all.  I took about 40 minutes off of the previous years time even though others said this years course was more difficult. I finished 47th out of 90ish riders including DNFs and 115 out of 206 men and there were many more with DNS/DNFs. 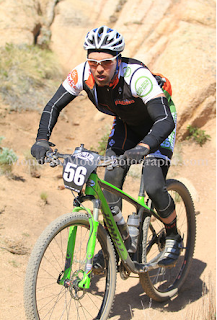 Both races were fun and a great challenge.  The ultimate compliment to a racecourse is would you ride it for fun if you could, and the answer to both courses is yes, I would definitely ride them for fun.  The primary reason for being uncertain about my return to 12 Hours of Mesa Verde is it is to close to the Original Growler.  I am sure I could have ridden faster if my legs were less tired at the Growler.  I think next year I will not do any races the three weeks leading up to the Growler, which should enable me to put forth a greater effort.
Posted by brett ebben at 6:39 PM