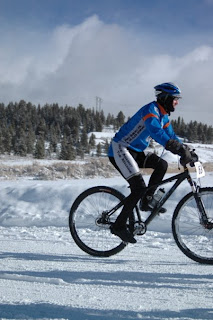 Start of the first mountain bike race of the year! 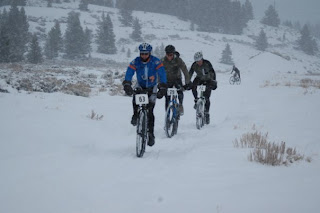 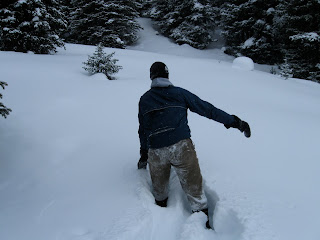 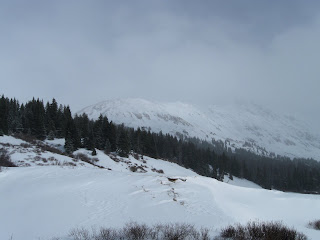 Mountains in the distance on the way home from race photographed while snowshoeing
Today Bill, Ben, Chris and I along with a host of other characters, 47 total, kicked off the Leadville winter mountain bike race series. Starting temps were in the low teens with threats of snow. It actually snowed until the start, then magically the sun peaked out for much of the next hour. Due to fresh snow, the course had to be re routed. The race was fun. I was able to bike a lot, but still had to run in some of the snow. My finishing time was 1 hr 1 minute. I had an average heart rate of 159 and got in about 800 ft of climbing. I won a $20 gift certificate which I turned into Geology of Colorado Illustrated thanks to the Rock Hut, which donated the gift certificate to the bike race.
Ben and I did not have enough. After the race we stopped at a random trail. The place we stopped was Clinton Gulch Dam Reservoir. It was at a dam high elevation of 11,000 plus feet. We hiked around for about 1.5 hours or so. Some areas of our hike we were post holing in mid waist deep or more deep snow.
Posted by brett ebben at 8:20 PM