After Saturday's snowfall in the city, Ben, Les, Amy (did not race) and I headed up to Leadville for the Tennessee Pass Night Jam, the second race of the Leadville Winter mountain bike series.  It was the first time a pinned a number on the Pugsley and it was the first race of the year.  Thankfully Leadville did not get anywhere near the amount we received in the front range (15-50 inches).  We stopped at the Tennessee Pass Cafe for first dinner and 4-5 cups of coffee.  Conditions were near perfect. 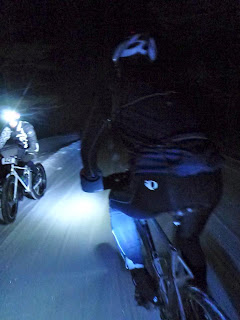 Ben (right) and I (left) warming up in 5 degree weather 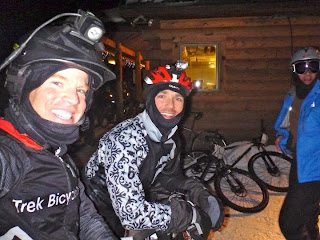 Les and I just before staging
The start of the race was pretty cool.  65 mountain bikers with lights on all set to go.  Two short but decent climbs lead to a long winding decent.  The course was groomed and in great shape, but its still snow.  The easiest way to descend in snow is to just let it go, but that gets pretty sketchy with turns and trees.  Add in a few noticeable "ruts" in the snow where people in front of me wiped out, and negotiating the descent became interesting to say the least.  Case in point, I started wandering a bit to the left halfway down.  Braking hard would have surely caused me to crash.  I continued to head to the left, sort of planned as it looked untracked.  All of a sudden my front wheel hit soft snow.  My bike stopped instantly, sending me cartwheeling over the handlebar.  Les passed me just as this was happening giving him a great vantage point and something to laugh at.
Now the chase was on.  I had to catch Les.  Once I got to the open meadow I upped the tempo a bit and began to pick riders off, including Les.   I latched on to a single speeder and we would end up yo-yoing the rest of the race.  The rest of the race was pretty uneventful.  Some fun descents and a pretty difficult climb for a 35lb bike in snow lead to the finish.  Even though the temperatures were around 0, I was not cold at all.  My Northwave Artic Celcius shoes were amazing-cold toes are the worst, everyone else seemed to complain about them.  The Leadville races are super fun, and I especially like the night races.  They are usually a great test of fitness, with summer like XC race efforts.  167 heartrate for Febuary, that is crazy, as my effort was pretty much pinned the whole time.  Race data here. 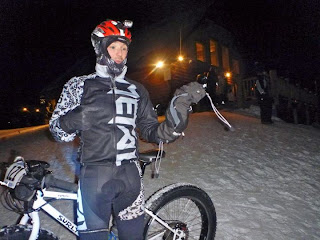 Still fueled up on caffeine and telling the story of going over the handlebar
Posted by brett ebben at 8:13 PM